Mercedes costs increased by less than £1m in 2018 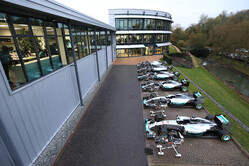 2018 accounts reveal that Mercedes 5th title double was achieved without the German team increasing its spending by more than £1m.

Indeed, considering that the majority of the work on the 2019 double title-winning car was carried out last year, this makes the Brackley-based outfit's achievement all the more impressive.

Only eight of the teams file publicly available accounts, and these reveal that in 2018 their costs rose by an average of £12m ($15.4m), indeed, as the spend, spend, spend mentality continues, costs rose £79m ($101m) over the previous decade.

It was this wholly unsustainable trend that led to the sport imposing a £135m ($175m) budget cap from 2021, a cornerstone of the biggest overhaul of F1's regulations in living memory.

However, just as Mercedes leads the way on track so too it is the benchmark when it comes to good financial housekeeping.

Though the engine division is entirely separate, this too saw an increase of just £3.6m to £186.7m ($239m), as the power units ruled the balance sheets just like they rule on track.

Despite this impressive housekeeping however, the team is still investing, with salary payments up 7.% in 2018 to £93.7m ($120m) after taking on 56 additional staff, thereby bringing up the headcount to 968.

Research and development spending also increased at Brixworth, up 24.2% to £116.7m ($149.3m). However, other than producing the engines that power the works team, Racing Point and Williams, the power units are to be used in the £2.2m 218 mph Mercedes-AMG One hypercar which launches next year.

Despite the budget cap, Mercedes has demonstrated that though its budget exceeds most of the other teams on the grid, it fully appreciates the need for cost cutting, the German team, for example, producing components faster, simpler, lighter and cheaper, which in turn reduces air freight and other associated costs.

Though the German car manufacturer has a 60% stake in the team, with a further 10% owned by the estate of the late Niki Lauda, the remaining 30% is owned by Toto Wolff, who over the years has proved himself to be a shrewd businessman.

Having previously owned a stake in Williams, in January 2013 he headed to Brackley, and since the hybrid formula was introduced a year later the team hasn't looked back.

Though the German team's 2019 accounts may well look equally healthy, it is feared that this will reverse next year as it prepares for 2021.