One of the more interesting rules for 2021 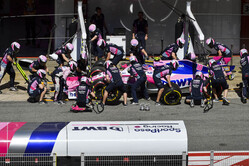 Among the numerous changes announced today for 2021, is that following scrutineering teams will not be able to change any of the bodywork components.

With race weekends to be reduced to three days, and scrutineering carried out on Friday, ahead of FP1, as opposed to Thursday as is currently the case, once the cars have been scrutineered no further changes may be made to the bodywork.

This means that the current practice of introducing new front and rear wings over the course of the weekend will be outlawed.

Though teams may test new components during the Friday sessions, the car they race on Sunday must be the same as was scrutineered on Friday.

"The introduction of a reference specification is an important point," explained F1 MD, Ross Brawn at today's press conference. "You will on the Friday be able to try things. If you want to try a new front wing you can do that but you can't race it. The idea behind that is to stop the proliferation or the necessity to build lots of parts in case that front wing works.

"In current F1 you want to take a new front wing to the track and try it, you're concerned it will work well and therefore you need to make two or three of them for when you turn up at the track so both drivers can have it and you've got a spare. Suddenly you've got a huge expense and you're flying in parts last minute to satisfy that need.

"There's some sensible housekeeping being done on the way we operate over a weekend to take a lot of strain off the teams."