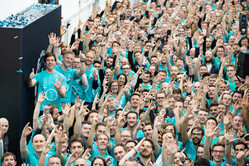 Though the German team and its driver will have to wait until December before they receive their trophies at the FIA Awards gala, both can head into the remaining races knowing that the titles are secured.

Indeed, citing the fact that both titles have been won, Toto Wolff will not be attending this weekend's race in Brazil, the first race he has missed since the hybrid formula was introduced in 2014.

However, recalling events earlier this year when fans were kept on tenterhooks for several hours after the Austrian Grand Prix as the stewards investigated Max Verstappen's late move on Charles Leclerc, a fake document posted on social media declaring that the Monegasque had won the race after the Red Bull driver was penalised, there are fears that future titles could be decided months after the end of the season, with the championship standings overturned.

From 2021, following a number of false starts over the years, F1 will finally have a budget cap. Though a surprisingly high number of exemptions have been allowed, the teams are limited to spending no more than $175m a year.

Confirming the 2021 regulations, F1 managing director, Ross Brawn warned of harsh punishment for any team that breaks the budget rules, the Briton admitting that in a worst case scenario a team could find itself excluded from the championship.

As the Independent reports, there are two reporting periods. The first is for the first four months of the year, while the second is for the full calendar year.

Should a team be found to have overspent during the full calendar year, because the reporting period ends on 31 December and the teams have a further three months to send evidence of their spending to the FIA, it may not be discovered until well into the following year.

If the FIA believes a team has exceeded the budget, it can refer the case to an adjudication panel, and while teams can appeal any decision this would be heard by the FIA's International Court of Appeal which would further prolong the process.

With penalties ranging from a public reprimand to the deduction of points and even exclusion from the championship, one can appreciate how this might affect the championship standings months after the season has ended and the 'champions' crowned.

"Points deductions would potentially have to be after the championship has finished," says Charles Braithwaite, a sports lawyer at law firm Collyer Bristow. "But it is almost inconceivable to imagine a driver winning the championship and then some months later having points deducted that would mean he did not win the championship."

Though other sports, including athletics and cycling have been known to make retrospective changes to championship results in the wake of participants breaking the rules, the most memorable occasions when this happened in F1 was when Michael Schumacher was excluded from the championship for his clash with Jacques Villeneuve at Jerez in 1997 and McLaren's exclusion from the championship in 2007 following Spygate.

And talking of Spygate, let's not forget that it began to come to light after the situation at McLaren began to spiral out of control, with Ron Dennis informing the FIA after Fernando Alonso had threatened to spill the beans.

Just a couple of years earlier, the FIA had offered a $1m reward to anyone who could provide evidence of a team cheating the newly announced rules relating to electronic driver aids such as traction and launch control.

Interestingly, the financial rules issued in Austin revealed that, among other things, the FIA can enter teams' offices as part of its investigation process and grant immunity to whistle-blowers.

As the teams, especially those at the top end of the grid, seek every last one-thousandth of a second over their rivals, will the battle for superiority prove to be a lightning rod for would-be whistle-blowers?

Worth noting also, and not mentioned elsewhere, is the fact that the regulations state that the $175m limit is locked in until the end of 2023 and that after that it will only change in line with inflation. So much for the downward sliding scale that was previously mentioned.

"It could be an absolute farce," says Christian Sylt of Formula Money, "because it is more likely to affect the teams which are challenging for the title as they are the ones with the most potential to over spend. By the time that their breach is being assessed they will be racing the following season.

"In itself, that might influence the kind of penalty they get because if the team under examination is winning the following season, who would want to strip them of their title from the previous year?

"It seems to be another example of a common problem in F1," he continues, "that it reacts to problems rather than preventing them.

"It would have been far more logical to ask the teams for a monthly budget forecast the year before and then get them to file monthly spending reports after that. If a team overspent in a certain month the FIA would not punish them as it could be due to unforeseen circumstances like higher build costs due to an unexpectedly high number of accidents."