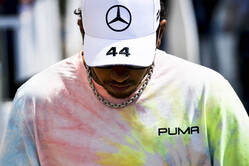 Lewis Hamilton, who finished third in today's Brazilian Grand Prix, was subsequently demoted to seventh after being handed a time penalty for his clash with Alex Albon.

Having reviewed video evidence from multiple angles including on-board cameras, broadcast cameras and CCTV, the stewards deemed that Albon was on his normal race line. Hamilton attempted to pass on the inside, but was unable to get far enough inside to accomplish the overtake and by the time he realized there would not be sufficient room he was unable to back out of the situation and the collision followed.

Finding that Hamilton was predominantly at fault for the collision at Turn 10, the stewards therefore ordered a five second penalty.

With the field bunched up following the second safety car period, the 5s penalty was enough to drop the world champion from 3rd to 7th, thereby promoting Carlos Sainz to third, the Spaniard having started from the back of the grid.

In the moments after the race, Hamilton accepted blame for the clash.

"I massively apologise to Albon," he said, "I went for a move and the gap just closed. (It was) completely my fault. I took a lot of risks today, I gave it everything."

It's understood that a number of drivers are under investigation for using DRS under the yellow flags, and with Sainz believed to be one of them the final standings could see more changes.