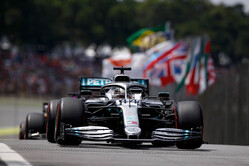 Keen to resolve any resultant penalties in time for the podium ceremony, following his clash with Alex Albon, the stewards summoned Lewis Hamilton in the moments after the chequered flag fell.

However, telling Rubens Barrichello in the official post-race trackside interview that he was entirely to blame, the world champion reiterated this to the stewards via his team's sporting director, Ron Meadows.

Whatever the stewards might have thought in terms of mitigating circumstances, by shunning the hearing Hamilton left them with no choice but to impose a time penalty.

"They were going to do a post-race investigation," said race director, Michael Masi. "So they did summons both drivers. But the team admitted to the breach. They came down and said, 'you don't need to summons us, Lewis has admitted it', apparently from what Ron said, and that was it.

"There was an investigation," he added, "but you investigate, and you've got the team that comes down and says 'we made a mistake', it becomes a very simple investigation to the other side!"

Meanwhile, the Australian revealed why it took so long for the safety car to be withdrawn after it was deployed in the wake of Valtteri Bottas' retirement, the Finn having parked his car.

"Valtteri did a fantastic job where he stopped," said Masi. "They were trying to push the car back into the gap, which is why we went double yellow, as we had the marshals there. It was off track, they were trying to push the car, but the car got stuck on the bump. So we actually had to deploy the crane to move it out. For me as soon as a crane is deployed, that's it, straight safety car."

Indeed, since the incident during the 2014 Japanese Grand Prix that led to the death of Jules Bianchi, the use of a crane automatically means the deployment of the safety car.

With TV footage showing the Finn having difficulty re-fitting the steering wheel, before leaving it in the cockpit and climbing to safety, Masi was asked if the car not being in neutral was an added issue.

"The marshal said it was stuck on the bump and left it at that," said the Australian. "Obviously as soon as I have to use a crane, it completely changes it. Being off track was why I covered it under a double yellow flag originally."