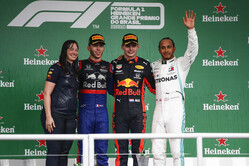 Q: What a great race Max. You looked unbeatable today. Did it feel like, driving, that if you had been on any tyres you would have been unbeatable?
Max Verstappen: Well, Lewis was very quick, so I had to keep pushing. All the time with the strategy he pitted one lap earlier so we had to be really on top of our pit stops. But yeah, two times we had a good move with him, so all the time that brought us back into first and yeah, from there onwards I could control the race with the tyres I had. Unbelievable. It was a lot of fun out there and of course great to win the race.

Q: With the speed, whenever you overtook the Ferrari onto the last corner, did you think you had that speed to overtake Lewis at the same time?
MV: Well, I was behind so I was pushing flat out on my our lap to try to be close to him and it was my only shot. Because of that I was close into the DRS. We knew that we had great top speed the whole weekend already, so yeah, then still of course it's a guess but very happy to get past.

Q: Well done to you and Honda, it's a great achievement. Lewis and Pierre, how was this final move. Lewis, when you went to the inside, did you think that you had the gap to go, that you had the speed to get past him on the straight?
Lewis Hamilton: Honestly, I didn't, but he did a great job, he was very fair with where he positioned the car. I massively apologise to Albon. I went for a move... the gap was kind of there, but obviously it closed right at the end and completely my fault. But still, a great race. Max did a fantastic job today. They just outclassed us in terms of overall performance. We couldn't keep up with them on the straights. Honestly, I raced my heart out,. I gave it everything. I left nothing on the table and I took a lot of risks today, as you saw.

Q: As you always do. The Brazilians love you. When you are here it's always pure racing, so we saw pure racing today. [With] Max, do you think any strategy would have done the case with him today. He looked unbeatable today?
LH: We threw everything and the sink at it. Honestly, we could keep up with them in the corners but they were outshining us on the straights, therefore I don't think there was anything we could do.

Q: Well done. Hey, Pierre! After a tough season, is it good to be back on that podium, the podium that you deserve since a long time ago?
Pierre Gasly: It's my first podium in Formula 1 and yeah for sure I will never forget it. It's such a special moment, I don't know what to say. It's so emotional and also to get it with these guys, with Toro Rosso; they gave me a fantastic car since I came back and I'm just so happy for Honda, for Toro Rosso, it's amazing day.

Q: I know it's your first [F1] podium but I meant that because you've been on the podium for so long in your career that it's good to be on the podium in Formula 1 isn't it?
PG: I've been many times on the podium and you kind of forget it and that's what I love about motor sport - these emotions, the fight. I just kept believing until the end. I saw they were battling and I tried to push as much as I could and the opportunity came to us. A great finish with Lewis as well. I was like trying to get low in the car, trying to get each Kp/h I could, but no, to these guys just a big congrats and a big thanks.

Q: Well done to you and to Honda. To hold on to that last straight, that corner alongside Lewis must be...
PG: I was strained. I told me engine to give me everything it had and I think without the progress have made it would have never been possible. I am just so happy; I don't know what to say.

Q: Max, can you just explain to us what happened there. It was an inch-perfect race from you. How do you sum it all up?
MV: Err, long summary! A lot of things happened. I think the start was good enough. I was happy about that. Then, the first stint everything looked quite good. Towards the end of that stint, yeah, just the tyres started to wear off a bit and then I had the traffic with the Williams cars and Lewis of course pitted that lap. It was not very nice. Actually, I did my pit stop and I came out also Robert came out and he almost took me out, I went into the wall. I had to brake there...

Q: Did you lose any time there?
MV: yeah, I almost caught the anti-stall, so yeah, it was very close. Then my out lap: luckily for me Lewis got stuck in the middle sector with Charles, so I pushed up to them and luckily I could get by Charles into Turn 12 and then I still had the tow and the DRS of Lewis and yeah, I was on full power and DRS open and I could get Lewis into Turn 1. From there onwards in that stint we managed the tyres quite well. I was waiting for Mercedes to react again but luckily we had enough of a gap to go one lap longer, so we did that. Good pit stop from the guys as well. I think it was 1.9 seconds, so that was incredible. And then on the medium tyre Lewis was pushing hard and I think we were quite closely matched and I think if there wouldn't be a safety car it would have been a good fight towards the end of the race. But of course then the safety car came out and I think there the team did a really good job calling me in again for soft tyres. At the time I was a bit like, 'is there going to work, I'm not sure'. But immediately in the re-start I had a good tow off Lewis and went around the outside. We had a good battle in Turn 1 and again in Turn 4. And then you could see that the tyre advantage really helped me of course and we could stay in first and control the race.

Q: How much did you enjoy your battling with Lewis today?
MV: Yeah, it was good. If you can battle against the world champion it's always better than battling someone for P10 or whatever. I think it was a good battle and we gave each other enough room, just enough but I think it was cool.

Q: Can you just talk us through that last re-start as well, because you got on the power very late?
MV: Yeah, it was just the way I wanted to do it, so it worked out well. I immediately had a gap so it was good.

Q: Is that something you learn in karting?
MV: Yeah, I guess so. You do many re-starts in go-karting. Many things happen all the time. F3 as well, I guess. In F1, you know, we have done so many, not even you being the guy in the lead, but you are in the group. There are always things you can do better, things you can learn.

Q: Pierre, first podium, just give us your emotions.
PG: It's just the best day of my life. As a kid you dream about being in Formula One, and then when it happens it becomes the best day of your life and then after you dream about your first podium. To be fair, I didn't think this would happen, coming back with Toro Rosso during the second part of the season. I just kept working on myself, tried to push the team as much as I could, telling them, OK, we need to make the best out of all the opportunities we have until the end of the year. And today it just came to us. We had a really strong race before that in P7, behind the top teams, and then, when they started to battle. First the Ferrari, and then I was like: 'OK, this looks quite similar to Bahrain 2018, in P4', and then after I knew Lewis would try something. And then yeah, we just managed to get past the two and yeah, quite intense finish and just incredible to get my first podium in Formula 1.

Q: What were your expectations coming into the race?
PG: Starting in P6, I felt good in the car the whole weekend. I think we managed to get the car exactly where I wanted. I said OK, if we finish best of the rest again in the race, this will be amazing for us. So, that's what we were doing. The whole race we had good pace. I was controlling the gap with the guys behind but we always had quite a safe margin. I could push quite nice. Even at the beginning of the race I could see that Albon and Charles weren't pulling away so much, so I think the car was working really well. With all the safety cars it was like: 'OK, let's see what happens,' and just tried to stay there and get the best out of what happens.

Q: Can you just describe the view from up on the podium?
PG: It's crazy. These guys are used to it. You get used to being on the podium in the lower series, and then after coming into Formula One, it's a feeling you miss. I was really missing it. My last podium was in Formula 2 when I was champion in 2016. And then, it's something you want to experience, especially in Formula 1 and yeah, today, to be in the middle, in second place between Max and Lewis, my first podium in F1 is just... yeah, just insane, and amazing and really emotional for me.