A sad day for Bottas 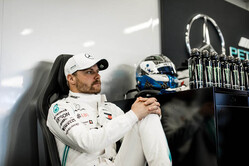 No sooner had Mercedes confirmed that Valtteri Bottas will start Sunday's Abu Dhabi from the back of the grid, than the Finn took to social media to announce the end of his marriage.

Bottas retired from the Brazilian Grand Prix with an engine-related issue, and in the German team's subsequent video analysis of the race, Andrew Shovlin admitted that the unit might need to be replaced.

On investigation it became clear that the unit had been damaged and as a result the Finn will need a new one this weekend. He is likely to have to start from the back of the grid.

Meanwhile, taking to Twitter, Bottas revealed that his marriage has ended.

"Unfortunately I have to let you know that the marriage between myself and Emelia has come to an end," he wrote. "Our ways have split because of the challenges of my career and life situation bring and we think this is the best for both of us and our future lives, so we are separating as friends.

"I will be forever thankful for all the sacrifices she had to make for me, for her support during many years and for all the experiences that we have had together.

"I trust that you will respect both of us and our privacy regarding this matter. This will be all I have to say and comment regarding our divorce."