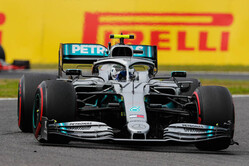 Valtteri Bottas pulling to the side of the track on the 52nd lap of Sunday's Brazilian Grand Prix marked the beginning of the unravelling of Mercedes afternoon.

Unfortunately, the German team's Interlagos woes could carry on over into next week's season finale in Abu Dhabi as the Finn may need a new engine, thereby incurring a grid penalty.

Bottas' retirement marked the team's second DNF of the season, the Finn having previously crashed out of the German Grand Prix.

In the latest Pure Pitwall video debrief from the German team, Andrew Shovlin gave insight to Bottas' issue in Brazil.

"Before we could even see any smoke on the TV, we were monitoring the oil level," said the Briton, "and we could that see we were losing oil at a relatively slow rate and a rate that we thought might still make the end of the race.

"When you started to see the smoke, the rate at which the oil was being consumed increased and eventually the car actually switched itself off," he added. "This is a protection mechanism for the power unit. It saw low pressure and then it switched itself off to avoid further damage.

"Now, that Power Unit has come back to Brixworth, they are going to be looking at it today (Wednesday) and into the night and they will be making an assessment of whether there has actually been any damage and whether or not we will need to take a penalty with Valtteri in Abu Dhabi."

Shovlin also explained the issue with Lewis Hamilton's energy deployment, that left the Briton unable to defend himself when Max Verstappen launched his attack after being undercut by the world champion. Unaware that the Dutchman had lost time during his stop behind Robert Kubica, the world champion pushed it to the limit and in doing so left himself short of energy for when the Red Bull driver mounted his subsequent attack.

"Come on guys, give me the information when my fricking battery's dead. F***!" urged Hamilton having been passed by the Red Bull driver.

Having complained of "massive derates", Hamilton asked: "Do I have an engine problem?" to which his engineer, Pete Bonnington replied: "I think everything is OK, just temps a little bit hot. You are still in Strat mode 8."

"There wasn't a problem with Lewis's battery, as in there was no hardware issue," explains Shovlin. "But we had gone to a deploy mode when we started this undercut sequence.

"So, that's on the in-lap," he continued. "The power unit starts to deploy energy at a rate that's unsustainable, and it did that over the in-lap and then over the out-lap, and the consequence was eventually that you run out of charge and the car will derate.

"Now, we knew that we had to give it everything to try and be able to make that undercut stick. What we'll do this week though is review whether the way we use that energy was efficient enough, whether we could have done something better to avoid Max being able to overtake us on the line."