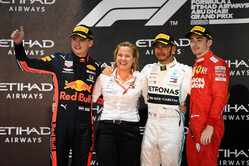 Q: Lewis Hamilton, congratulations, your 11th victory of the season and that looked one of your most dominant. You must be very proud?
Lewis Hamilton: Honestly, I'm proud definitely but I'm just super grateful for this incredible team. To all at Mercedes, who have continued to push this year... who would have thought that at the end of the year we would have this strength in the race and even though we had the championships won we just really wanted to keep our heads down and try to see if we could learn and if we could extend and if we could extract more from this beautiful car that they've worked [on]. It's a piece of art. And I'm also so grateful to team LH. I travel around the world to 21 different countries, probably even more, and I get to see people who continuously inspire me and send me messages and lift me up. So I want to send a big thank you to everyone that's here, everyone that's back home. Thank you for watching, thank you for supporting. I feel so happy with today, man.

Q: Now it has been a great season and I know you're in that moment, but you've got on the podium two young guys, two young chargers. They've thrown some big races at you this year, but this is a great way for you to end the season, with such a dominant victory. These guys have still got a lot of work to do?
LH: These guys, there are a lot of youngsters coming through. If you look at the grid, for example, from second to like seventh or eighth was all super youngsters, so I'm really proud to be in a period of time where there are such great youngsters coming through. These guys have been doing a phenomenal job and I really privileged to be in the period of time where they're here and I'm looking forward to hopefully more close battles with us in the future, so I hope it gets close for us next year.

Q: Just before I move on, what have you got planned for the winter?
LH: Oh, just family time, man.

Q: Enjoy your family time. Max Verstappen, it's been a pretty good season for you - three victories, third in the Drivers' Championship. Today that was the best you could hope for. You had some issues though didn't you? We heard you on the radio; you were having to manage some issues.
Max Verstappen: Yeah, a few little things. At the end of the day it wouldn't have made a difference in terms of position. Yeah, we had to do a bit of a different strategy to Ferrari of course, they pitted quite early and we went long, because they overtook us on the first lap. After that our pace was quite decent, just Mercedes and Lewis today, they were just a bit too quick. As a whole I think it's been a positive season and of course to be P3 in the championship is a nice ending.

Q: Lewis said he's going to be spending family time in the winter but I guess you've got your sights on the world championship, so you'll be at the factory, you'll be on the simulator, you'll be working hard?
MV: I think we are all working hard but it's also good to take some time off, be with family and friend and be fully recharged for next year and come back stronger.

Q: Congratulations. We've got Charles and Lewis sharing notes here. What are you discussing? They way the race played out?
Charles Leclerc: Yeah, just overall how quick he was during the race. With the hard I think he did a 39.2, so yeah, I was just saying congratulations to him.

Q: Now, third place; it's another podium. It's been a great year, first year for you at Ferrari. I know you guys all want to win but you have to be satisfied. You are the first team-mate to have finished in front of Sebastian in the world championship in his time at Ferrari, so it's been very positive for you.
CL: Yeah, I'm extremely about this year. I've learned a huge amount thanks to Seb. Yeah, it's been a great year. For me a realisation of a dream since childhood. I've always dreamed to be in Formula 1 but especially with Ferrari. To be now with this team is unbelievable and now it's up to me to work, to get better, and hopefully give them the success they deserve.

Q: Lewis, many congratulations, as emphatic a victory as we have seen from you, and in your 250th race as well?
LH: Jeez! That's a lot of races.

LH: No, I don't want to reminded of the age! No, what an incredible year it has been. What an incredible stretch it's been with this team. Yeah, after winning the Constructors' and the Drivers' Championship I think it was really important for us as a team to continue to push. You know, we hadn't got absolutely everything from the overall perfect package. So we were just trying to push the limits and push the boundaries and yeah, I think this is the perfect way to end the season, on the right foot. I think it was a great weekend in the sense that there was a Ferrari and a Red Bull and a Mercedes in the top three, obviously in the finishing order but also on the grid, and then a lot of young drivers behind me, making me feel young, which is great. I'm really just grateful to my team who have continued to push all year long and just have never lost sight of the objective. We've all had a common goal and inspired each other to continue to push and strive for perfection. So, incredibly grateful to everyone and I hope that everyone at Mercedes and our partners. I'm sure they are pretty happy.

Q: Were you surprised by your dominance today, because you were 13 seconds ahead of Max after 20 laps?
LH: Yeah, I definitely wasn't expecting to haver the pace advantage to that extent. Our long run pace was quite good and I was told that we might be a tenth or two ahead but then in the race we had a bit more of an advantage in that respect. And once I got out in the clear I was able to manage my pace pretty well in that first stint and manage the tyres. I just had to go as long, basically, as Max was going. Then we got onto that next set of tyres and for this track the tyre was good. The hard tyres is quite resilient to any abrasion and that. It goes a long, long way. I think it can do the whole race stint. I think towards the end of the race I was like 'I want to have some... I've got to push and see if I can extract any more performance from the car'. I do wish that we had some battles. I saw on TV you guys battling...

MV: You could have slowed down!

LH: You guys are too quick on the straights.

MV: Just give it a chance.

LH: I'm sure we are going to have some great races. We had some great races this year, Max and I, so congratulations to them for continuing to rise and I'm excited to be amongst those guys and fight with them next year.

Q: Max, your second consecutive podium here in Abu Dhabi and your ninth podium finish of the season. You didn't seem happy with the car after your pit stop. Can you just talk us through what the problems were?
MV: Yeah, I just had some torque holes on throttle. There were delays and stuff, so it was not great, and we couldn't fix it, so we drove around the problem. At the end of the day, it wouldn't have made a difference in terms of the result.

Q: What does a torque hole mean? In the olden days would we have been talking about a misfire?
MV: No, just when I go on throttle it's not doing what I want.

Q: Did it cost you lap time?
MV: It did cost me lap-time - but like I said, it wouldn't have given me the win today.

Q: Apart from that, race was fine?
MV: Yeah, race was fine. Little bit of a shame about the first lap but then I think we had a good first stint, to go long and yeah, I think once we then put the hard tyres on, the pace was decent. I could get by Charles and then I could just do my own race. I mean, Lewis was too quick, so I was just focussing on my own race and lap-times.