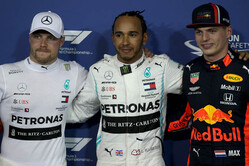 Q: Lewis you can see it's a pretty good reaction you've got. I guess it's the best way you could sign off this season on a Saturday - pole position, the first time since Germany as well.
Lewis Hamilton: Yeah, it's been such a long slog trying to get this pole position in, but we just kept our heads down and just continuing to try... the guys have been doing a great job around me, the other drivers, so it was really juts trying to focus on continuing to do my job. Yesterday was quite wobbly, so I had to really recompose myself last night and come back today focused and managed to really dial in the car with great work from the engineers, mechanics continuing to do a great job and yeah, what a crowd. Every time I come here I seem to get a lot of love here in Abu Dhabi, and also there are a lot of Brits here as well, so a big thank you to everyone.

Q: And how nice is it to get a car that you fully focus on? It's looked in shape all weekend and I think that's credit to the team. You do never give up do you?
LH: We never give up. There's always room to improve. There has been a lot of growth in this whole year, I think for so many people within the team. I can obviously speak for myself, there's been a lot of growth but also these last couple of races there's been a lot of growth, from a driver's perspective, and just constantly looking for those small milliseconds. You know, Valtteri 2.0 has been rapid also this weekend, so I'm glad that we're in this position. Of course to end the qualifying season with a pole, which has been a while, you know we've only had four earlier on this year, so... It's been a special car and it's the last time I'll get to qualify with it so I'm glad I did it proud today.

Q: And Max is obviously lining up alongside you; continue on that battle that you had in Brazil that kept us on the edge of our seat?
LH: Absolutely, yeah. I think we're in a slightly better position this weekend. Obviously, Max is continuing to drive well, but I'm looking forward to battling with him for sure.

Q: Valtteri, it's a front row but at the same time you obviously take a grid penalty. I guess nice to be out there and show what Mercedes are capable of but just feel short at the end?
Valtteri Bottas: Yeah, as a team it's been a really strong day and we saw yesterday in the qualifying [simulations] that we have a good pace. Didn't feel quite as good today as it did yesterday with my car, struggling a bit more with sliding, but I think Lewis made some good improvements since yesterday and he put some good laps together in the qualifying, so he was quicker. In any case, I'm going to start last with my 40-place grid penalty or whatever, so we'll find the fighting spirit for tomorrow.

Q: Surely you must relish that challenge. You're going to be a nuisance in some people's mirrors, and you'll be pushing all the way, you got a little bit of insight yesterday, do you believe that you can come through and get on the podium?
VB: I believe. Anything is possible. We do have a good car and normally Sunday is better than Saturday for us so we'll give it all I have for sure.

Q: Max, front row start. I know you just came short today, it wasn't quite there at the end, Mercedes have looked supreme, but a good start and you're already in the battle with this guy that you were battling with in Brazil.
Max Verstappen: Yeah, I think today was the best that we could do. I think we all know that. Mercedes is quite dominant here. We tried everything we could. I think overall pretty happy. Still good to start on the front row. Of course I would have like to actually qualify there. I think still a lot of chances for tomorrow, so we'll see what happens.

Q: How did the car feel yesterday on the long runs? Do you think you are competitive enough to race them?
MV: From our side it felt alright, but we always know that Mercedes are very quick on the long runs. We'll just wait and see what happens tomorrow.

Q: Lewis, an emphatic performance by you, the car seemed to be performing well, how good was the lap?
LH: Thank you. It definitely was a very good qualifying session for us. It's not been the easiest in terms of qualifying for us throughout the year. It's been something we've just been chipping away at. Considering we're not developing the car currently I think we just really tried to see what we could pull out of the car this weekend and it's well suit to the track and it's been feeling good. Yesterday was a little bit difficult. I had to re-centre myself for today. Yeah, I think the best thing is when you get to Q3 and you pull out two good laps. I think my first lap it felt special and then the second one obviously was an improvement, so I can't complain. Just a big thank you to all the team for their continued efforts and even though we have both titles won they continue to push and strive for better and that's inspiring for me, so I've been doing the same thing.

Q: It's been a while for you, since the German GP your last pole. How much satisfaction does this give you?
LH: Yeah, of course. It feels longer than the German Grand Prix. If I'm really honest I don't even understand how I got the German Grand Prix pole. But yeah, it's been really hard, particularly since we have come back from the break. The competition has been spectacular; all drivers have been doing an amazing job. I don't think my qualifying has been terrible but it's just not been at my usual standard perhaps, so of course it's incredibly satisfying to know that we have put the work and to end my last qualifying session with this car, which has been a real incredible journey with this car this year, so to finish it off on the front row, there's not a better feeling really. Obviously that's not even half the job done. Tomorrow we've got to battle with the Ferraris and the Red Bulls but I think we put ourselves in the best position possible so incredibly happy. Honestly, it's really strange, you say it's 88 [poles] but it honestly feels like the first, I don't know why. It feels super-fresh. Maybe because it's been so long since earlier on in the season and I'm glad to finish on five poles in the year.

Q: Valtteri, great lap. The car seemed to improve as the session went on.
VB: Yeah, the lap was OK. I think still it felt like Lewis was a bit too quick and I think we were slightly different with set-up as well by the end of the qualifying. Honestly, I felt a bit more comfortable yesterday with the car overall. But obviously for me, anything I was trying to keep in my mind was for the race because, in any case, whatever happens today I knew I'm going to be starting last with my, I don't know how many place, grid penalty, 40, or something. So, I mean, I tried, obviously, as hard as I could. In Q2 I did only one run to save a new tyre set for the race, one set of Softs, if needed. But yeah, Lewis did a very good job, so congrats for the 88th - it's a big number. Massive respect for that. But yeah, I'm just really already looking forward for tomorrow, because it is going to be compromised.

Q: Valtteri, what is the plan for tomorrow. Can you plan your race, or are you going to have to react to what's going on around you?
VB: For sure, we've tried to make a plan and the whole weekend, trying to optimise for the race because, like I said, qualifying result doesn't really matter for me today. So, everything we've done with the tyre choices, and everything we've tried to optimise that. We've had many ideas for the strategy, and obviously it's going to be a challenge, coming up from there - but I do look forward to it. I'm sure it can be fun trying to come up.

Q: Final thought Valtteri. How are you feeling? You're not sounding great.
VB: Feeling better already than a couple of days ago. I've been quite ill this week, I think since Monday night, so when I travelled here it got worse - but in the car it doesn't matter. The adrenaline kicks in and you feel normal.

Q: Max, at one stage during the session you reported suspension trouble. Was there any problem with the car?
MV: No, it was just to check. Because I hit one of the orange inside - the high ones. So they would have a look at it, not that it would catch us by surprise, or anything.

Q: And just tell us about your Q3 session. How good was the lap? How was the car performing?
MV: I think the lap was really decent. There was not much I could do better, I think. I mean, there is never a perfect lap. It was good. I mean, I was just driving to the limits. We just seemed to lack a bit of grip, compared to them. Especially, they are very quick in the last sector. And there are a lot of off-camber corners. They are always very dominant here on this track, and we tried to be as close as we could and unfortunately we were just lacking a bit too much in that last sector. But overall, I think I'm pretty pleased. To be third in qualifying, second on the grid. Of course, I would have preferred to be there on pure pace but for us I think it was a pretty positive weekend.

Podium here last year. Do you fancy your chances of getting on the top step tomorrow?
MV: I guess you will always try but you also have to be realistic and I think Mercedes is very quick - but we'll give it everything we have, tomorrow in the race.