Back to square one for Grosjean 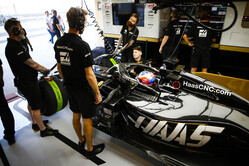 Other than robbing him (and others) of vital track-time, Romain Grosjean's encounter with Valtteri Bottas undid all the Frenchman's work over the course of the two sessions as Haas has had to change the unique package it had put together for him this weekend.

As the team continues its 'pick 'n' mix' approach to chassis components in a bid to overcome the issues that have compromised its efforts for much of the season, along with a floor that was previously used in pre-season testing, Grosjean was trying various other parts. However, the clash with Valtteri Bottas, and the subsequent damage, means that the team has had to return to square one in its approach to the weekend.

"The plan was to try in FP1 the latest configuration that we received, that Kevin tried in the USA, and he wasn't happy at all with," explained Grosjean. "The guys made some small changes on the diffuser and we put it on my car to get data basically, and we said the plan was after FP1 we revert to the 'race 1 hybrid' car.

"But in FP1 I felt really good in the car," he continued, "and I said to the boys, I think we can try to race that package, we can try to work around the set-up, there are some good characteristics that I like - end of the braking, the car turns a little bit better, so it's better for my driving style. So I think we can get there.

"And then we had the incident with Valtteri and the bad news is that we had only one set of that car," he sighed. "So now I need to revert to the car that Kevin has been running.

"I'm going to take what they've done. But obviously all of Friday is kind of going in the bin.

"Valtteri apologized, he made a mistake, he even offered me one of his floors, but we have to stick with what we know!"