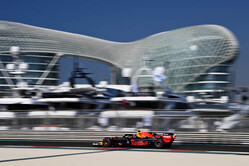 In many ways this weekend is pretty much an anti-climax, both titles are decided and all the contracts are in place for next season's seats.

Indeed, the fact that this session takes place in altogether different conditions to qualifying and the race means it has little relevance and will probably be used by the teams for the testing of 2020 components.

Other than Charles Leclerc looking to leapfrog Max Verstappen for third in the driver standings, there is the question of who will finish 'best of the rest' in terms of the drivers and whether Renault can hold on to fifth in the team standings.

Perhaps the strangest thing heading into the weekend is the fact that Romain Grosjean has reverted to the floor he used in pre-season testing... shades of back to the future.

The lights go green and Kvyat leads the way, followed by Kubica and Magnussen.

As more and more drivers head out it's mostly softs and mediums.

Five minutes in and all but Albon and the Mercedes pair have been out. Incidentally, Hamilton's car is sporting the number 1.

The Ferrari pair post the first times of the day, Leclerc stopping the clock at 1:40.298 and Vettel at a slightly conservative 2:06.031.

Ricciardo heads out sporting a very impressive array of sensors at the rear.

"Balance feels pretty good," reports Albon, "a little bit of oversteer through slower corners", while Ricciardo asks if he has time for a 'comfort break' as the aero rakes are removed from his car.

A 39.175 sees Verstappen go second as the session finally begins to kick into life.

"Would suggest a very slow cool down lap to get these tyre temperatures down," Hulkenberg is told.

After 27 minutes, as Hamilton goes quickest (37.591), ahead of Vettel (39.022), Russell is the only driver still to post a time. Though he has completed 5 laps, the Briton is understood to be feeling unwell.

A 38.496 sees Verstappen go quickest, as Hulkenberg goes seventh ahead of Perez, Stroll and Magnussen. Incidentally, the German is the first of the medium-shod runners.

As Hamilton expresses concern at a lack of grunt, Gasly is told to put more braking energy into his front tyres on his cool down lap.

Hamilton retakes the top spot with a 37.591, but shortly after he slows. He is told to "limp home". On arriving back at the pits his front tyres, in particular, are badly blistered.

At that point where the extra set of tyres have to be handed back to Pirelli, it's: Hamilton, Bottas, Verstappen, Vettel, Leclerc, Albon, Hulkenberg, Stroll, Perez and Kvyat.

Following that brief lull, Bottas heads out on mediums. The Finn subsequently goes quickest with a 36.957, 0.634 faster than Hamilton on the softs.

The final corner is causing issues for most drivers, Bottas the latest to run a little wide.

Hamilton heads out on the mediums, while Red Bull stick with the softs.

Hamilton is unhappy with his front brakes, feeling that are "still cold".

However, the Briton isn't as unhappy as Ricciardo who pulls to the side of the track just after Turn 21 following a clear engine failure, flames and smoke appear from the rear of the Renault.

The session is red flagged while the car is removed and oil is removed from the track... and also from Gasly's visor.

"I'm full of oil," says the Frenchman, "there's oil all over the place," adds Sainz.

Sainz is first out, the Spaniard dispersing the cement dust the marshals had carefully spread to soak up Ricciardo's oil.

The Racing Point pair head out on hards, while Vettel and others switch to mediums.

Albon is warned that the track surface remains slippery, while a number of drivers make a point of avoiding the area where the oil was dropped.

As the clock ticks down, there are 19 drivers on track.

A late spin for Vettel sees the German clout the barriers at Turn 19 with his left-rear. A the session is red flagged - with just under 2 minutes remaining, sked if he is OK, the German sighs: "Yeh, I'm OK... argh!".

Replay shows he lost the rear after touching the kerb.