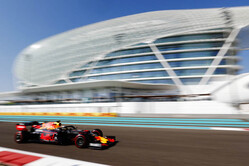 Because qualifying and the race take place later in the day/evening, this morning's session was pretty much irrelevant, though, due to start from the back of the grid come race day, setting the pace will have hopefully given Valtteri Bottas a much needed boost.

With red flags following Daniel Ricciardo's engine detonation and Sebastian Vettel's brush with the barriers, the interruptions merely added to the conundrum, as teams tried various strategies while testing components for next season.

Very early days, but, as in Brazil, and indeed Austin, Ferrari appears to be playing catch-up with Mercedes and Red Bull.

The lights go green and Raikkonen gets proceedings underway. He is followed by teammate Giovinazzi and Grosjean. Leclerc is also eager to get back to work.

As Raikkonen posts 39.990, the cameras pick up on Fernando Alonso arriving in the paddock wearing a McLaren shirt.

Shortly after the Dane complains of something "loose" around his shoulder, he is told to pit. "We think it is not safe," he is advised.

"I've got a problem with the downshifts," reports Hamilton.

Verstappen posts 37.145 to go quickest, as Bottas goes second with a 37.551, however both are on softs while Leclerc's best was on hards.

Seventeen minutes into the session and Ricciardo is on track, his team having changed his engine following the detonation in the earlier session.

Having sorted his seat fittings, Magnussen is back on track, as Bottas vents his (sweary) frustration after finding Verstappen running very slowly on the racing line.

Following a long stay in the pits Leclerc finally heads out again, the youngster enjoying a track completely devoid of other drivers.

Despite the clear track, having posted PBs in the first two sectors he clouts the barriers as he exits Turn 19 having run over the Astroturf that lines the track. He heads back to the pits.

"Nothing felt weird with the car," he says, but just check."

Bottas goes quickest with a 36.256 as the qualifying sims get underway. The Finn almost makes the same mistake as Leclerc, but somehow gets away with it. Moments later, Hamilton posts 36.634, and Vettel 37.114.

Verstappen leapfrogs Vettel with a 36.811, as Hamilton seeks to improve but is unable.

A 36.642 sees Leclerc go third, like Hamilton, over 0.3s off Bottas' pace. The Monegasque was quickest in the first two sectors, but struggled in the final twisty section.

Giovinazzi is the latest to almost come to grief at Turn 19, the Italian doing well to stop his car just short of the barriers after spinning.

Despite their best efforts, nobody is improving on ther softs which are clearly only good enough for one flying lap.

Switching to the mediums, Bottas gets the race sims underway.

Vettel, however, heads out on a new set of softs and subsequently improves to fourth with a 36.691. It's a ragged lap from the German, who looks as though he's really struggling to keep the SF90 on the black stuff.

Kvyat switches to mediums, while Russell and Gasly are on hards.

Oh dear, Grosjean appears to have fallen asleep at the wheel as he hits Bottas, sending the pair into a spin.

"What the ****," cries the Frenchman, who moved across the bow of the Mercedes as it came up to pass him in Turn 11. "He just turned into me, he didn't leave any space," says Bottas.

The session is red flagged as the debris is cleared.

Appraised of what happened to cause the flag, Hamilton replies: "I could've guessed". And he wasn't referring to his teammate.

Of course, the red flag has compromised the teams' race sims.

The session resumes and soon there are six, seven, eight cars back on track, Hamilton and Vettel among them.

"As soon as I slow down, he slows down, it doesn't make a lot of sense" moans Verstappen as he feels he is being held up by Vettel, who in fact is seeking to find some space due to the traffic ahead of him.

Though Grosjean's session is over, Bottas is back on track.

"If felt like something switched off in Turn 1," reports Ricciardo.

A late switch to hards for Leclerc.

As the chequered flag is waved, Bottas is advised that he has a leak and is to return to the pits slowly.

The session ends. As in FP1, Bottas is quickest, ahead of Hamilton, Leclerc, Vettel, Verstappen, Albon, Grosjean, Perez, Kvyat and Gasly.