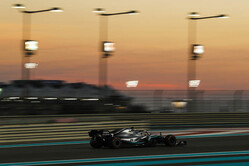 Both practice sessions ran largely as expected, despite a couple of interruptions in the morning and another red flag in the afternoon that disrupted the long runs. The FP2 session was the most relevant, with falling track temperatures as afternoon gave way to night, just like qualifying and the race.

Valtteri Bottas led a Mercedes one-two in FP2, with his fastest time on the soft tyre nearly a second faster than the equivalent time last year (set on the 2018 hypersoft).

Most of the running in free practice was on the Yellow medium and Red soft compounds, with fewer laps on the White hard.

Conditions remained dry and warm throughout the day, with representative race conditions throughout FP2, in the region of 25 degrees centigrade ambient and 28 degrees on track.

As expected, wear and degradation was generally quite low throughout FP2, pointing at a one-stop race on Sunday.

Mario Isola: "No real surprises from either of the free practice sessions from our point of view, apart from the fact that the performance gaps between all the compounds is a little bit bigger than expected for now, and the red flag interrupted the long FP2 runs at a crucial moment. Given that FP3 tomorrow will be run in warm daytime conditions, analysing tonight's data carefully will be particularly important as the teams work out their qualifying strategy: whether to approach Q2 with the medium tyre - which could be a valid tactic - or instead the soft tyre, if they believe it will last well enough throughout the opening race stint. The hard could equally play a pivotal role on race day for those who start on the soft, with a considerable number of teams trying it during FP2. This evening resulted in best lap times that are around a second faster than they were in the same session at Yas Marina last year: a sure sign that Formula 1 continues to evolve and become constantly quicker, so we need to ensure tyres that match this progress."