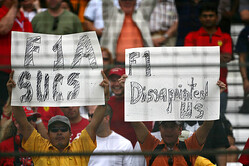 When it was confirmed that there will be two banked corners at Zandvoort next year, when F1 returns to the Netherlands after a 35-year absence, memories of Indianapolis 2005 came to mind as it is understood the second banked corner will be steeper than the banking at the legendary American track.

In 2005, following a number of tyre failures during the practice sessions, all the Michelin runners withdrew from the race at the end of the warm-up lap leaving the six Bridgestone-shod runners to contest the event on one of the most shameful days in the sport's history.

Though mindful of the demands imposed by such corners, and strictly regulated in terms of the tyre's construction, Pirelli's Mario Isola admits that the sport's sole tyre supplier is limited in its options.

"The only thing we can do is to react with the pressure, and we will have to increase the starting pressure," he admitted, according to Motorsport.com.

"If you look at the regulation we are obliged to stay on the same construction and same specification for the whole year," he added, "so we cannot design a tyre for the banking and we cannot design a specific construction, for Zandvoort. So the only possibility is to try to manage the prescriptions in terms of camber and pressure."

The Italian manufacturer has already run a number of simulations using data supplied by the circuit, but is looking to the teams to give their input also.

"We have made a simulation of the track being completely flat and with the camber," he confirms, "so you can see the difference in terms of additional load on the tyre. That was what we had in mind to calculate.

"But now to make a proper investigation, we need to receive the simulation from the teams and then we are in a position to define the pressure."