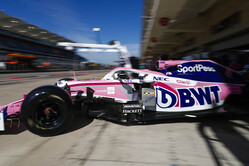 Over the course of the two Friday practice sessions in Austin, all the drivers were given access to the tyres Pirelli is looking to use next season.

"I think it was a disappointment," said Sebastian Vettel, "because there was no step forward. But it's pretty much done, the tyres are built for next year so that will be it."

"It just feels like a harder compound to be honest," added Ferrari teammate, Charles Leclerc. "I was sliding more, but to be completely honest, on my side I probably need to do a bit more mileage before to give any judgement."

While Lewis Hamilton opted to take the Fifth Amendment, Romain Grosjean admitted: "If you put the stickers on the side of them I don't see a difference.

"We used the two prototypes in the morning, had a good check, they are not any better," added the Frenchman, "so a bit disappointing from that aspect."

"It didn't taste so good," said Nico Hulkenberg. "But I don't know if that was the tyre, it was a strange run, a bit messy and the balance was quite different and difficult. Less grip but also the front to rear axle grip seemed to be the opposite of the main tyre."

Leaping to the defence of the tyres, amidst claims from the teams that they should merely stick with the current compounds, Pirelli's Mario Isola insists that the post-Abu Dhabi test should result in a more positive reaction.

"The feedback was mixed," he said in Brazil last weekend. "I believed that we had quite difficult conditions in Austin, it was very cold and the new tyres are designed with a different philosophy.

"So the plan now is to test them again in Abu Dhabi where we have a two-day test planned specifically for testing the new construction and new compounds. We will have a comparison that is more reliable compared to Austin.

"We tested this new construction during the year with the teams and with their cars and we found an improvement in terms of overheating, in terms of compounds with a wider working range," he continued, "but mainly the new construction was designed because every year the performance of the cars is increasing and obviously we have to follow this increase in performance."

As for sticking with the current tyres, he said: "If we don't change the construction, the only possibility is to raise the starting pressure," he admitted, "and raising the starting pressure is making the overheating worse and the behaviour of the tyre in general worse.

"The new construction has been designed with the target to keep the pressure as low as possible, according to the improvement in the performance of the cars."

However, the Italian admits that should the criticism continue after the Abu Dhabi test, Pirelli could consider scrapping the tyres.

"So, we need a bit more time to test them properly on long runs, to understand if we achieve this target.

"After that, obviously we are very happy to accept any... not accept any decision... but to discuss the result of the test and to see what is better for the sport."