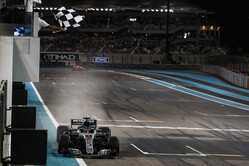 For the 21st and final grand prix of the year, Pirelli is bringing the very softest combination of tyres in its range: C3 as the White hard, C4 as the Yellow medium, and C5 as the Red soft. These are well-matched to the smooth surface of the Yas Marina circuit, providing the optimal compromise between performance and grip at a race that starts in the late afternoon and ends in the evening. After the grand prix, testing begins for next year with all the teams.

Yas Marina is almost exactly average for the season when it comes to severity, with smooth asphalt and a well-balanced mix of corners that is more about traction and braking than lateral forces.

Historically, the Abu Dhabi Grand Prix has been a one-stopper, with low wear and degradation. This looks set to be the case again this year, with the hardest choice a step harder than in 2018 (when supersoft, ultrasoft, and hypersoft were chosen). Last year, Lewis Hamilton won the race by going from ultrasoft to supersoft quite early, under a virtual safety car.

There's been a harder tyre choice made compared to previous seasons at a few races this year: this is to help drivers to push to the maximum during each stint, rather than manage their pace to guarantee a one-stopper.

With the race going through until the evening, track temperatures tend to fall quite drastically as the race progresses. As the car gets lighter on fuel, this can alter the pattern of tyre behaviour to potentially increase stint lengths. It also means that the FP1 and FP3 sessions aren't particularly representative.

Immediately after the Abu Dhabi Grand Prix, Pirelli will embark on one of its busiest testing programmes ever. On Tuesday and Wednesday, the teams get the chance to test the 13-inch tyres for next year alongside the current tyres. This test will be followed by a three-day official Formula 2 test and then the final 18-inch development test of the year for Formula 1 (with Mercedes) and Formula 2.

All the F1 teams will get the chance to test 20 sets of tyres each during the official two-day test on Tuesday and Wednesday after the race, encouraging them to run back to back assessments between the 2019 tyres and their 2020 equivalents. Pirelli will select 12 of those sets on behalf of the teams (including some C3 and C4 sets from both 2019 and 2020, for comparative purposes) with the teams themselves choosing the rest.

Mario Isola: "Abu Dhabi marks the end of another very long season, but the work still continues for us after the grand prix, with a series of tests for both Formula 1 and Formula 2, using 13-inch tyres as well as 18-inch tyres. In total, we'll bringing around 4500 tyres to Abu Dhabi, for racing and testing: more than double the usual quantity. The two-day official F1 test after the race will be particularly important, as it gives a chance for the teams to compare 2019 to 2020 tyres in representative conditions and with specifically adapted cars for the first time. Before then, we have one final grand prix to complete. There's a strong chance that we could see more lap records broken again over the weekend, with the teams now having maximised their knowledge of the 2019 tyres."