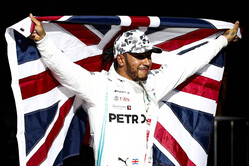 While we totally accept that our reaction to Lewis Hamilton's announcement in 2012 that he was to join Mercedes the following season was wrong - boy was it wrong - we do not believe for a moment that a similar move to Ferrari any time soon would be equally inspired and successful and that another generous helping of Humble Pie was the order of the day.

While the Briton's first season at Brackley built further on the basic groundwork done by Ross Brawn, Michael Schumacher and Nico Rosberg, it was with the introduction of the hybrid formula in 2014 when the stars truly aligned, something that those playing ace pokies online pokies can only dream of.

In the meantime, Ferrari has won just 17 (14%) of those races, and in all honesty has never looked likely to mount a sustainable challenge.

In a season of blunders, while Mercedes and Hamilton were signing off in exactly the same way they began the hybrid era, the Prancing Horse continued to shoot itself in the hoof, be it the poor timing of Charles Leclerc's final run in Q3, or the fuel saga that overshadowed the youngster's race next day. And that's forgetting the fuel flow issue that has dominated recent races.

And yet, as the Italian team faces a period every bit as barren as that between Jody Scheckter's and Michael Schumacher's titles... twenty-one long years as any tifoso or tifosa will tell you, the media continues to link Hamilton with a "dream" move to Maranello.

Of course, the Briton didn't help the situation when asked about 'not so secret' meetings with Ferrari president, John Elkann, cryptically telling reporters: "Naturally everything that happens behind closed doors is obviously always private with whoever it is you end up sitting with, but I think for many, many years I've never ever sat down and considered other options, because we've been on a... just driving straight ahead into the path that we've been on and the journey that we've been on and to be honest, I still think we're on that path and I think there's very little that's going to shift it from that but I think there's no harm in... I know Toto is also looking at his options in terms of his future and only he will know what is the best thing for him and his family.

"So I'm waiting to see what he's doing with that. I love where I am so it's definitely not a quick decision to do something else, but of course I think it's only smart and wise for me to sit and think of what I want... if it is the last period or stage in my career.

"Actually I want to keep winning so I think that's... I want to keep being able to fight with these guys as well. I can't really tell you what else is going to happen moving forwards."

When Hamilton - already favourite with the likes of www.kiwibetting.com for another title in 2020 - talks of Toto Wolff's options, he is, of course, referring to speculation that Mercedes may opt to leave the sport, or that a major overhaul of the team could see the Austrian cashing in his chips.

Not the sort of person you would want to play Poker with, Wolff appears to be treating the saga with mild amusement, and as he and Hamilton consider life beyond 2020, admits he sees a "25% chance" of the Briton heading to Maranello.

"I still think a driver of that level will always know that he can make an impact on a team," said the Austrian. "What I'm considering is when he left McLaren to Mercedes, it was said that it wasn't the right move, and it proved to be right. So I don't think I want to make a mistake of underestimating Ferrari's potential.

"I don't see a sense of entitlement for us to win a seventh or eighth title," he continued, "on the contrary, I think we need to stay humble about the success.

"This is what I mean, not just saying. I feel if you look at it from a rational standpoint, everything speaks for the fact us continuing the journey together. But then, there might be other factors, a new challenge, an exciting deal, that you always need to factor in. But I give this a 25 per cent chance."

"We've talked very openly about Ferrari, and what the brand represents," he admitted. "But for me, I think as long as we able to produce a quick car and a powerful engine, we will always have an opportunity to decide who drives the car, and I think no doubt, Lewis's priority will be to try and make it work with the team, and I will try to make it work with Lewis.

"But the most important is that we have a good car, then we are able to decide for ourselves."