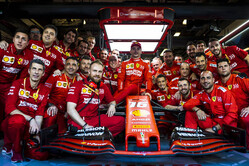 While the British media firmly believes Charles Leclerc should be given number one status at Ferrari next season, team boss, Mattia Binotto can only oblige it in the sense that the Monegasque will be given parity from the outset.

Ahead of this season, the team made clear that preference would be given to Sebastian Vettel due to his experience, however, in the wake of a lacklustre overall performance, and the fact that Leclerc has out-qualified and out-scored the German, from next season the pair will be free to race as equals.

"Obviously now we just finished the season and there will be time from now to Australia," the Italian told Sky Sports when asked about driver parity next season, "but when we started this season, the situation was quite different. We had a rookie and an experienced driver.

"If you look at the last races they were free to race," he continued, "and I think that is where we start from.

"I think that his season has been outstanding. Starting seven times on pole, two victories, on his very first year and finishing ahead of Sebastian in the championship, it's still an achievement."

Reflecting on the season, he said: "We did our best each time, but obviously we are unhappy for the performance of the car and unhappy for some mistakes we did. For reliability problems we had, and maybe some decisions. But I don't think these are regrets - we need always to look ahead.

"I would say we did our best, not yet sufficient," he admitted. "We know that our car is not fast enough, is not reliable enough, but let's say we've now got some time ahead and we are trying at least to create some solid foundations with the team, with our organisation, and eventually try to challenge the others in a better way next year."