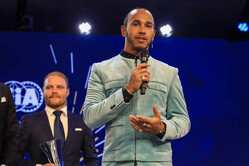 The 2019 season officially concluded on Friday when Lewis Hamilton and Mercedes were presented with their 2019 world championship trophies.

The FIA Prize Giving Gala, which was held at the Carrousel du Louvre in Paris, saw the champions from a number of major international motorsport categories officially crowned by receiving their trophies. Among them were Toto Wolff, Lewis Hamilton and Valtteri Bottas - Wolff on behalf of the team, Hamilton and Bottas for finishing first and second, respectively, this season.

It was a special season for Mercedes as the team wrote F1 history by winning a sixth consecutive championship double - something no other team has done before in the 70-year history of the sport. In 2019, the team scored 15 victories, 10 pole positions and 739 points.

"This season has been very challenging," said Wolff. "We had to raise the bar once again and achieved some remarkable results. I'm incredibly proud and honoured to receive this trophy on behalf of everyone in Brackley, Brixworth and Stuttgart. Everyone within this team knows how much hard work, dedication and skill it takes to perform all year long at this level. This trophy is the result of that passion and dedication.

"Congratulations to all those who received awards at this year's FIA Prize Giving Gala. This event is a great way to bring the motorsport family together, celebrating everyone's achievements." 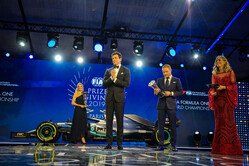 "It's been incredible to watch many of you this season," said Hamilton, "you get to see how incredibly competitive everyone is and how hard everyone has been pushing this year.

"For me it's definitely been the best season of my life, I've enjoyed collaborating with this incredible team.

"Watching Valtteri, and a lot of these up-and-coming drivers this year has been fantastic," he continued. "As a whole, I think outside of the family, I've been able to do the things that Toto has allowed me to do that a lot of people question... but they all encourage me and push me forward and I really am inspired by all the different sports I get to watch so a big, big congratulations to all the champions here.

"When we started this season our car was a real heap to drive," he admitted, "it wasn't that great at the beginning - in testing we couldn't quite get it and it wasn't until the last day when we got it to work, and then we went to the first race and had some great results.

"Next year will be close with the Red Bulls - Max will be fantastic and the Ferrari's, again will be tough, their pace has been extraordinary particularly in the second half of the season so I'm hoping for everyone who is watching you can see the closest season." 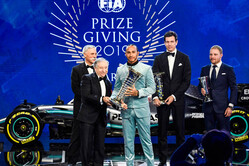 Max Verstappen, who finished third in the championship, was awarded the 'Action of the Year' prize in recognition of his battle with Charles Leclerc in the British Grand Prix.

"This was only one move from that race, but we had a lot of fights," smiled the Red Bull driver. "It was cool.

"A bit of off track, a bit of wheel-banging, which I think is quite cool and normally it doesn't really happen in F1."

Teammate, Alex Albon was voted Rookie of the Year by the FIA Drivers' Commission.

"It's been something I could never imagine," said Albon on stage. "Getting the call from Toro Rosso was a dream come true."

In a year in which motor sport lost the likes of Charlie Whiting, Niki Lauda, Robin Herd, Anthoine Hubert, Jean-Paul Driot and Andrew Cowan, FIA president, Jran Todt said: "The FIA Prize Giving is an occasion of celebration, so it seems only fitting to include a permanent tribute to those who have given so much to the sport and to all.

"The indelible mark they have left on all our lives must be fondly remembered."

Lauda, who passed away in May, was recognised with the Personality of the Year Award.