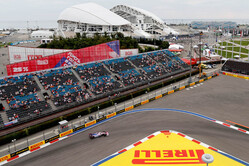 The promoters of the Russian Grand Prix are "confident" that the event will not be affected by the country's banning from all major sporting events.

On Monday, the World Anti-Doping Agency (Wada), imposed a four-year ban in the wake of the Russian doping scandal.

Among the various sanctions imposed are a ban on Russia hosting sporting events, Russian athletes participating in major events and the country's flag not being flown at other events around the world such as next year's Olympics in Tokyo and the 2022 World Cup in Qatar.

However, race promoters ROSGONKI insist it would be "legally and technically impossible" to move the race.

"The contract for holding the Russian round of the Formula 1 World Championship was signed in 2010, long before the events investigated by WADA, and runs until 2025. ," said ROSGONKI in a brief statement.

"The Russian round is included in the FIA international sports calendar for 2020," it continued. If, after an appeal, the WADA wording on the cancellation of a major event, provided that it is legally and practically possible, remains the same and refers to the Formula 1 Russian Grand Prix, there is no legal and technical possibility to withdraw and reassign the Russian Formula 1 Grand Prix to another country.

"We are confident that the Russian Grand Prix will be held in 2020 and in the following years and invite everyone to Sochi. The ticket sales are in full swing."

While the FIA hasn't commented on the situation, a spokesperson for F1 told the BBC: "We will monitor the situation to see if there is an appeal and what would be its outcome."

The ban follows WADA's investigation of mass doping involving Russian athletes, which concluded that officials in Moscow had deleted files linked to positive doping tests in laboratory data that could have helped identify drug cheats, as well as planting fake evidence.