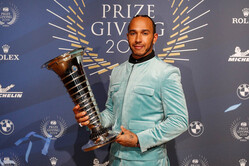 Despite the rhetoric supposedly coming out of the Ferrari and Red Bull camps, with precious few regulation changes this year, few would bet against Lewis Hamilton and Mercedes securing their seventh titles.

Though Charles Leclerc and Max Verstappen are likely to add to their win tally - Sebastian Vettel also if he sets his mind to it - one only has to look back at Hamilton's domination of events in Abu Dhabi to realise that the Briton and his team are as strong as ever.

Indeed, the most likely threat to Hamilton may lie just across the garage, that's assuming that Valtteri Bottas remains true to his word and comes back "really stronger" this season.

This would mean the Finn ensuring that it is Bottas 2.0 - or even 3.0 - that turns up in Melbourne, porridgeed-up and prepared and able to mount a sustainable challenge all season.

However, as the Finn and his rivals continue their pre-season preparations, Hamilton took to social media, and alongside a picture of him 'hugging' a wooden pillar in his house, to declare: "I am at peace when I'm here, can focus and build my mind and body so that I can come back year on year.

"I'm going to be a machine this year, on another level than ever before!"