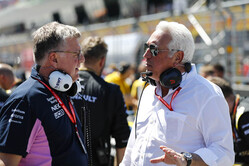 Aston Martin has accepted Lawrence Stroll's £182m lifeline, with the Canadian billionaire replacing current executive chairman, Penny Hughes who will step down, while, in a surprise move, it is understood that current CEO, Andy Palmer will remain in his position.

As was the case with the purchase of Force India in 2018, Stroll headed a consortium in buying a stake in the iconic British car manufacturer, the other members of the consortium understood to be are expected to be Andre Desmarais, Michael de Picciotti, Silas Chou, John Idol, Anthony Bamford and John McCaw, all of whom were part of the F1 team buy-out.

"The difficult trading performance in 2019 resulted in severe pressure on liquidity which has left the company with no alternative but to seek substantial additional equity financing," said Hughes. "Without this, the balance sheet is not robust enough to support the operations of the group.

"Notwithstanding recent weak trading, the strength of the Aston Martin brand and our expanding portfolio of cars has allowed us to attract a strong new partner in Mr Stroll to support the turnaround of the business."

"I am very pleased that I, and my partners in the consortium, have reached agreement with the board and major shareholders to make this significant long-term investment," said Stroll. "Aston Martin Lagonda makes some of the world's most iconic luxury cars, designed and built by very talented people.

"Our investment announced today underpins the Company's financial security and ensures it will be operating from a position of financial strength," he added. "On completion of the £500m of fundraising I look forward to working with the Board and management team in Aston Martin Lagonda to review and improve each aspect of the company's operations and marketing; to continue to invest in the development of new models and technologies and to start to rebalance production to prioritise demand over supply.

"I, and my partners, firmly believe that Aston Martin is one of the great global luxury car brands. "I believe that this combination of capital and my experience of both the motor industry and building highly successful global brands will mean that, over time, we fulfil Aston Martin Lagonda's potential."

In addition to Stroll's investment, which gives him 20% of the company, existing shareholders are being asked to inject a further £300m in new shares or risk their existing shares becoming diluted.

As part of the deal, Stroll is to rename his Racing Point F1 team after the iconic car manufacturer from 2021, Aston Martin's current sponsorship of the Red Bull coming to an end this year.

"Following the Aston Martin Lagonda announcement earlier today, the team can confirm that the manufacturer will remain title partner until the end of the 2020 season but this contract will not be extended past the end of the current term," said Red Bull in a subsequent statement.

"Red Bull Racing has agreed to release Aston Martin from its Formula One exclusivity clause which in turn has allowed it to generate the necessary investment required to re-finance and pursue alternative opportunities within the sport.

Red Bull Advanced Technologies will continue to work with Aston Martin in order to deliver the Valkyrie hypercar, with the first cars scheduled for delivery at the end of the year.

We thank Aston Martin for their support over the past four years in which time we have achieved 12 wins, 50 podiums and six pole positions together. We wish Aston Martin's employees and shareholders all the best for the future and our focus remains on working together throughout the 2020 season and ending our partnership on a high."

"He brings with him his experiences and access to his Formula 1 team," Andy Palmer told Reuters. "We've talked a lot in the past few years about wanting to be clearly rooted in luxury and obviously Mr Stroll knows an awful lot about luxury."

Today's news would appear to put an end to a media claim that Stroll was looking to buy the Mercedes F1 team in partnership with Toto Wolff who currently owns 30% of the Brackley-based world championship winning outfit... while at the same time ending speculation that Dmitry Mazepin was to buy Force India... that is unless, of course, the Russian will now go after Mercedes and Toto.

Assuming Racing Point does indeed become Aston Martin F1 team, it will be the umpteenth name change for the Silverstone-based outfit that began life as Jordan in 1991, then subsequently became Midland, Spyker and Force India.

Synonymous with Sports Car racing, particularly Le Mans, and James Bond, Aston Martin's involvement in F1 consists of six races between 1959 and 1960. Roy Salvadori finished 6th in both the British and Portuguese Grands Prix in 1959, while Carrol Shelby finished 8th in Portugal and 10th in Italy. The following season, Salvadori failed to start the Dutch Grand Prix and subsequently failed to finish in Portugal, while Maurice Trintignant finished 11th.