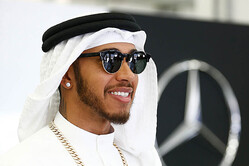 Surely, it was mere coincidence, nothing more, that just one day after a spokesman for the Bahrain Grand Prix organizers said that Bahrain would welcome a Grand Prix in Saudi Arabia, officials in Azerbaijan revealed that in the four years of hosting a round of the world championship, Baku has benefitted to the tune of $500m.

On seeing such encouraging results, officials in Saudi must have been falling over themselves to sign on the dotted line and hand over the rumoured £50m annual hosting fee.

Meanwhile, in F1 Towers in St James's Market, Chase and the gang will have been smiling at the prospect of a Saudi Grand Prix, for while race attendance and TV viewing figures can fall prey to "systematic errors", the balance sheets cannot.

Though the teams are already working on their 2021 cars, none of them has yet signed new agreements tying them to the sport.

That said, Honda has agreed to supply Red Bull in 2021 and Mercedes will re-unite with McLaren, while Charles Leclerc and Max Verstappen have both signed long-term contracts with their respective teams.

And while there remains doubt over the futures of Mercedes, Renault and Haas, doubt that is not entirely about the new regulations being introduced, one of the fiercest critics of the original proposal has noticeably softened its stance.

Previously aghast at the suggestion of a budget cap, Ferrari's chief executive, Louis Camilleri recently said that not only did he agree with the $175m spending limit that is to be introduced, but that some of the items currently excluded should be included.

"In time, that budget cap should encompass more of the car, the power units, the drivers as well, various other things," he said Camilleri.

In its determination to demonstrate that the sport was under new management, Liberty Media wasted no time in stamping its mark on F1, pushing Bernie Ecclestone into the side-lines with a meaningless Prince Harry-stye title, while introducing a new logo, theme tune and that plush new HQ in the heart of London.

Of course, all of this costs money, and it came as little surprise that F1's costs increased by a whopping 35.3% in the first two years under its new ownership to £393.6m ($514m) - just a little more, the sharp-eyed among you will have noticed - than Baku benefitted in four years of hosting its F1 race.

While Chase Carey's speech to investors in November was hopefully entitled ‘Poised for Growth', it is unclear precisely where this growth is going to come from.

"There is enormous opportunity in areas like sponsorship, in the short term," said Liberty's chief executive Greg Maffei in February 2017, days after the company bought the sport. "There are some near-term wins around things like advertising."

Shortly after, Carey predicted that the sport's revenue stream which will grow "the fastest is probably sponsorships. Realistically today, we have a one-man sponsorship operation. There are many categories we're not even selling into. Putting an organization in place that enables us to execute on that probably has the most immediate impact."

However, in 2018 he admitted to the Financial Times that "the perception was just there are sponsors waiting...They were lined up out there and as soon as we had somebody to go call on them, they were just going to sign up. The world's not that simple."

Indeed, the sport's sponsorship revenue in 2018 was up a mere 1.7% on 2016 - the year before Liberty took control - to £203.9m ($266.4m), and as of January 2020 has still not signed a significant series sponsor, and despite Carey's assurances there is no sign of one coming along any time soon… indeed, according to well-placed sources quite the opposite.

Broadcasting, another of the sport's three main revenue streams, brought in £462.3 (603.9m) in 2018, however, of the three it is one of the biggest challenges, being something of a double-edged sword. For while F1 is keen to take the money from cash-rich pay-per-view broadcasters it is aware that many fans are unwilling or unable to pay and as a result risks losing them as more and more live coverage is lost from free-to-air.

In the UK alone, in 2019, when Sky obtained exclusive coverage of all but one race, Channel 4, which broadcasts highlights several hours after the race saw its cumulative audience drop by 10.8 million on 2018, drawing 34.7 million viewers in total.

Indeed, in the last 11 years, as more and more live coverage has gone behind paywalls, the sport's global TV audience has dropped by 18.3% to 490.2 million viewers.

"We're optimistic that the opportunity size is significant," said Frank Arthofer, F1's global head of digital, media and licensing, as the sport prepared to launch its live streaming service. "We have by our estimates around 500 million fans in the world, which is quite a number. If even, conservatively, one percent of that customer base is a super avid hardcore fan, that's a five million addressable audience to sell this product to."

Back in the real world, Investment bank Morgan Stanley forecast that the streaming service would attract 10,000 subscribers in the United States in 2018 and a further 94,000 around the world. Even looking ahead to 2027 its prediction fell far short of Arthofer's estimate, claiming there would be just 227,000 subscribers in the US and 1.7 million internationally.

Of course, the situation hasn't been helped by the numerous ongoing problems with the service which have led to countless refunds and Chase Carey insisting, for the second successive year, that the service is still in its beta phase.

Little wonder that in March 2019, Greg Maffei admitted that there is "probably never" going to be as much demand for F1's streaming service as there is for WWE's, which at the time had 1.6 million subscribers.

However, with a growing number of races unable to meet the ever increasing fees, in a bid to retain some of the most traditional events on the calendar, F1 had to reign-in its demands and slash its fees.

Even so, with Germany unable to agree a mutually acceptable deal, the renewal of the British, Italian, Spanish and Mexican contracts, together with new arrivals Holland and Vietnam will only boost the sport's hosting fee revenue by £14m ($18.4m) next year.

When the full financial results for 2019 are available they will be slightly skewed by the mega-deal Bernie Ecclestone agreed with Sky which kicked in last year.

Indeed, the benefit of that deal will be reflected in the first quarter of this year's accounts. However, it is in quarters 2, 3 and 4 that investors will get to see the true picture.

Previously, Ross Brawn had dismissed talk of a race in Saudi Arabia, believing it unlikely due to the country's record on Human Rights.

As some point to other host nations on the calendar with similarly dubious records, the bottom line is that money talks, and in its need to please investors F1 really needs to do some deals.

It is no longer a question of if the likes of Saudi Arabia will host a round of the Formula One World Championship, but when.

F1 - or rather its owners and investors - need it... and others like it.

That said, Formula Money notes that while FOM has applied for a trademark in respect of numerous races, most notably Argentina, Miami, Las Vegas, Poland, Portugal, Morocco, Bulgaria and the Philippines, there is no current application for a Saudi Grand Prix.