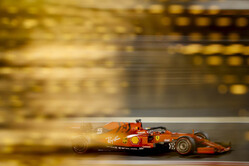 When Liberty Media bought F1 in early 2017, it made no secret of the fact that it wanted to expand the calendar.

While Bernie Ecclestone had previously rejected Vietnam, under its new ownership Formula One Management (FOM) accepted it, and along with Zandvoort, which returns to the calendar after thirty-odd years, Hanoi makes its debut on the schedule this year, a season which features the most races (22) in its 71 season history.

With the proposed Miami Grand Prix seemingly on the back burner for now, attention has shifted to Saudi Arabia.

After several years of speculation, early last year there were clear signs that a deal was close to being agreed, however FOM had concerns about the country's Human Rights record... or lack of it.

In F1, of course, money talks loudest, and therefore it comes as no surprise to hear that talks are at an advanced stage, with claims a race could be held in Saudi Arabia as early as next year.

Last November, the fifth season of Formula E got underway in Diriyah, which is located just outside the capital city of Riyadh, which had previously secured the rights to host the 2020 Dakar Rally.

If it goes ahead - and with no residents' commissions to make a noise it almost certainly will – it's understood that initially the Saudi Grand Prix would be held on a street track in Jeddah, prior to being moved to a planned 'entertainment resort' in Qiddiya, around 45km from Riyadh.

Plans for The Capital of Entertainment, Sports and the Arts, facility in Qiddiya were revealed last summer by the Qiddiya Investment Company (QIC), which unveiled proposals for an impressive sports and entertainment facility, which, along with a race track, would include indoor and cliff-top stadium.

The race circuit would form part of the Speed Park, which would include shops and a hotel.

The facility is one of several so-called giga-projects, part of Saudi Vision 30, the Crown Prince's ambitious plan, first announced in 2016, to diversify the economy, making it less dependent on oil while at the same time promoting culture and lifestyle in a bid to boost tourism.

At a time the likes of Silverstone, Barcelona and Spain have had their hosting fees slashed, it is claimed that the Saudi race could be worth around £50m a year.

If agreed, the Saudi Arabian event would join two others in the region, Bahrain and Abu Dhabi.

While the organizers of the Bahrain Grand Prix were initially concerned at the addition of the Abu Dhabi event, a spokesman claims that a race in Saudi Arabia would be welcome.

"Since our first race in 2004, our goal has been to grow the fan-base for motorsport in the region," the spokesman told the Daily Mail. "We would, therefore, welcome initiatives which can support that growth and believe that a future race in Saudi Arabia would be complementary."