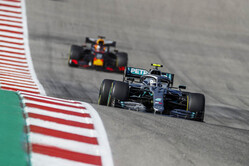 In a masterpiece of understatement, certainly as far as drivers and fans are concerned, F1's chief technical officer, Pat Symonds has admitted that the aero rules introduced in 2019 to aid overtaking were not well thought out and the wrong way to go.

Intended to allow the cars to follow more closely it was clear from the outset that they made almost no difference, and while the season saw a number of classic races, more often than not this was down to weather conditions or other factors.

"They were done in a bit of a hurry," admits Symonds of the 2019 regs. "And with the benefit of hindsight, I wouldn't have done them.

"In terms of what they did to the wake of the car, relative to what we've done for 2021, it is minuscule," he continued. "In fact, we had never run exactly the sort of configuration that the rules came up with.

"We'd done a lot of research by the time the 2019 rules came out in mid-2018 and we were starting to understand critical areas, but we hadn't run the configuration we had to actually get some rules out for. So I think we could have done that whole exercise a bit better. But I don't regard that in any way as a precedent for what we've done into 2021."

While there is concern that some teams will switch focus to next season far earlier than usual, Symonds believes this could be a good thing in terms of the racing this year.

"If there is domination at the front, then that dominant team, whoever it may be, can probably afford to switch a little bit earlier," he said, carefully omitting the fact that this is almost certain to be Mercedes, thereby maintaining the status quo.

"That, I hope, will stop the teams from sitting back and just getting on with the 2021 cars," he added. "Whereas some of the teams towards the back may be able to have a little bit more effort on the '21 car. So we should see a good season this season.

"And even though change generally will initially separate the cars before they start coming together again, I hope that in 2021 we're going to see good racing as well."

Having admitted the ineffectiveness of the 2019 regulations, the sceptics among you will have noticed Symonds (deliberate?) use of the words "think" and "hope" in terms of the 2021 version.