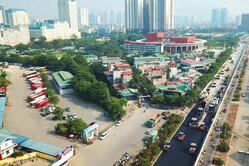 As confusion over just how widespread the virus is - with sceptics claiming that figures given out by the Chinese authorities should have a zero, or even two, after them - with just weeks to go before the season kicks off in Melbourne, with the Chinese Grand Prix already cancelled, Vietnam is now also being monitored.

“Vietnam has not been raised as a potential issue yet," Zak Brown told reporters at today's launch of his team's 2020 contender, "but obviously it is very near and neighbouring (China) so we are going to monitor the situation.

“Obviously the wellbeing of McLaren and the greater world is of upmost important," he continued. "We would never do anything that puts our people at risk, and I don’t believe Formula One would.

"I spoke with Chase (Carey) yesterday about China, or maybe it was two days ago, and he was giving me a heads up before the official announcement came out.

“This is obviously a new situation for all of us, we’re all in the same situation, it’s unforeseen, unheard-of," he sighed. “I know some races have been cancelled in the past but not necessarily what we’re facing here, we will have to react when we know more, it’s the same for everyone.

“First and foremost it’s a terrible situation for the world so hopefully that situation gets resolved because I think other things such as sport doesn’t matter compared to that.”

“I am not so happy we can’t go to China because of the coronavirus,” admitted Lando Norris. “But safety is above all other things, money, sponsors and everything. It is a shame but all the decisions that have been made were made for the right reasons.

“I would love to go there,” he replied, when asked about concern over the Hanoi race “If we don’t get the chance to then obviously I won’t be so happy but that’s how it is.”

Should the Vietnam race be postponed, like the Shanghai event, it would leave the sport with an unprecedented five-week gap between the Bahrain and Dutch races.