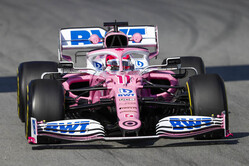 Though there is much murmuring in the paddock, it is not thought that anyone will protest, however, that could change should Sergio Perez and Lance Stroll take the Pink Panthers further up the grid.

Previously, Racing Point and its predecessor Force India had been particularly critical of the close relationship between Ferrari and Haas, and Steiner believes the Silverstone outfit's 'hypocrisy' will come back to bite.

"Sometimes you have to think before you talk," he told reporters, "I will say that, because maybe one day it's your turn and then you cannot go against it.

"As we all know, they complained quite heavily a few years ago," he continued, "so now it is going full circle. It is up to them. I don't really care."

However, as was the case with his own team, Steiner admits that copying a success story is only natural, indeed it has been part and parcel of the sport for as long as anyone can remember.

"I would put it like this," said the Italian. "They use a lot of Mercedes parts on their car, so why would they go and copy a Red Bull?

"It's the same with us. We buy a lot of parts from Ferrari. So which car are we going to copy? I guess a Ferrari. I mean, if you will copy a Toro Rosso or a Red Bull we would be pretty stupid because we would try to invent something which is not there.

"So they're just doing what we are doing: just trying to get the best out of it and use that model."