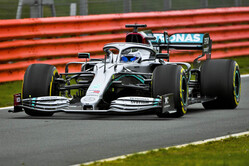 One of the biggest challenges in 2020 will be trying to find the right balance between developing the current car and preparing for the massive changes that will be introduced the following year.

2021 will see the biggest change to the technical regulations in the history of the sport which will require virtually every part of the car to be designed and developed from scratch.

In addition to the technical complexity of the regulation change, the new financial regulations mean that teams will have to re-organise the way they tackle these changes.

"2020 is an evolution of the current regulations and the gains will be smaller, so you need more time and effort to keep improving your car," said Toto Wolff. "On the other hand, the 2021 regulations are so very different that you need a lot of time to prepare for them. Every month you start later than your competitors will make it more difficult to catch up. You also have the effect of the cost cap which means that you will have fewer resources available to throw at things in 2021."

"It's a massive challenge," he admits. "We had a lot of regulatory changes in recent years, but this time we're effectively tackling a two-year project. Trying to get this right will make 2020 the most difficult season, but it is also an amazing opportunity. This team has shown time and again that it loves being challenged and we will face this one with the same passion and determination that has made Mercedes so strong in recent years."

Meanwhile, 2020 is a special year for the Mercedes team as the outfit celebrates its 10th anniversary as a modern-day Mercedes works team in F1.

"It's fantastic that the team is able to celebrate its ten-year anniversary," said Wolff. "We made our first come-back to F1 over 25 years ago as an engine supplier and then we went all in ten years ago. It shows our long-term commitment - with our own works team and as a Power Unit supplier to valuable customers. We have been a part of Formula One with changing technical regulations, with changes in the Daimler top management, but our commitment to the sport hasn't changed. It's great that we get to celebrate our tenth anniversary with the Mercedes works team as one further milestone of this commitment."