Wolff hits out at "lunatic" report 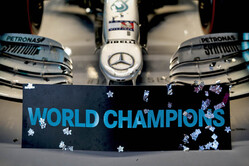 Speaking at the announcement of a multi-year partnership with chemical giant INEOS today, a deal which confirms Mercedes is to remain in F1 for the foreseeable future, team boss Toto Wolff, hit out at the recent claim that Daimler was to hold a crunch meeting this month at which the future of the German company's F1 programme would be decided.

At a time the German manufacturer was seeking to make widespread redundancies, the media claim suggested that the F1 project would similarly suffer, with it suggested that Wolff would buy the team in partnership with Lawrence Stroll and rename it Aston Martin, while Lewis Hamilton was linked (again) with Ferrari.

"Not true," Daimler Chief Executive, Ola Kaellenius told Reuters at the German Auto Industry annual reception in Berlin when asked of the crunch meeting, while Hamilton made clear that contract talks with the German team had not even begun, far less fallen down as had been suggested.

Indeed, Stroll subsequently bought into Aston Martin, and it is Racing Point that will be renamed.

"F1 has always been a great provider of headlines over the winter break," Wolff told reporters today. "And by the sheer lack of racing results and the controversy on track, dropping a bombshell of a headline, always sells.

"And in that respect, I'm always surprised that there's some lunatic out there that writes something on an internet page and it's being picked up, which was a complete nonsense story, which was put straight by the CEO of Daimler the following day.

"That is one part of the story," he continued. "The other part is that with everything we do, we have to question is it the right activity that we deploy? It's whether it's in the petrochemical business, whether it's as an OEM in the car industry, or whether it's F1.

"We, as Daimler today, we see the advantages and the benefits that Formula 1 as a marketing platform provides to us and we see the data. And that is the underlying condition why we're doing it."

Other than the obvious kudos from dominating the hybrid era, Woll said that the recent AMD and INEOS deal, combined with the introduction of the budget cap, should make F1 more attractive to Daimler.

"This is exactly what we have as our target," he said. "We want to make it a no brainer from the sheer numbers. The marketing is huge and the return on investment should be the icing on the cake.

"We see that in the American sports leagues that most of them, the NFL or the NBA, are profitable franchises. And this is my personal aim and my personal contribution with our partners to turn this into such a corporate company, so that from a service standpoint it becomes a no brainer to participate."

Referring to the ongoing discussions with Formula One Management in terms of the new Team Agreements, he said: "It's an ongoing process and it's a complicated set of contracts, trilateral contracts between the FIA, the commercial rights holder and all the teams.

"That needs time and the devil is in the detail," he admitted. "So I wouldn't want to commit here to give you a specific date because there are quite some topics that remain to be agreed on. It's a work in process. Clearly there is the will and the wish for all of the stakeholders to come to a close before we embark on the 2021 season, because otherwise that would be an uncomfortable situation."