Raikkonen: F1 not the best place to preach environmental concerns 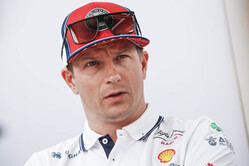 In the wake of Lewis Hamilton's social media activity following the Japanese Grand Prix, the world champion appearing uncharacteristically downhearted, which in turn led to concerns over his state of mind, the Briton's attitude to the environment was centre-stage at the FIA press conference.

As Hamilton spoke of his determination to be carbon neutral by year end, Sebastian Vettel, Sergio Perez, Antonio Giovinazzi and Alex Albon nodded along, agreeing that everyone needs to make an effort.

Elsewhere in the paddock however, Kimi Raikkonen, who turned 40 shortly after the Suzuka race, had his own thoughts on the matter.

"Obviously I think it involves everybody who lives on this planet," he told reporters. "In the end, we all try to do what we can, but honestly we are probably not in the best place to start making big stories out of it, because in the end we're burning fuel for what? To be first? Second?

"I mean, for sure we try to do our part always if and when it's possible, but I think F1 is in probably not the strongest place to tell people that this is what we should do," he continued, "because to really go that route we should all stay home and forget the racing."