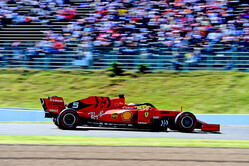 When Sebastian Vettel pitted on lap 16 in yesterday's Japanese Grand Prix, sticking with softs, albeit a brand new set, it was clear the German was adopting a two-stop strategy, and the following lap Valtteri Bottas responded, and while switching to mediums it was clear that the Finn was also now on a two-stopper.

Though Mercedes left Lewis Hamilton out for a further four laps, thereby suggesting that he was on a one-stop strategy, he too was put on a two-stopper, much to the Briton's obvious chagrin.

In the closing stages, despite his fresher, softer rubber, and having reeled in Vettel, the Briton was unable to pass him.

Speaking after the race, the German added to Hamilton's frustration by admitting surprise that he had been put on a two-stop strategy.

"I was surprised when they pitted to be honest," said the Ferrari driver. "I expected him to stay out and try the one stop.

"Once I knew that.. also before, Valtteri was so far away and we were not fast and it was not possible to catch him, so when he came out I was not rushing to open the gap, I was just trying to keep my tyres somehow fresh to make sure that if he arrives then everything is still in good shape and I have the chance to have good corner exits and play the advantage we have down the straights, which worked.

"It got a bit close once with traffic," he said of the cat and mouse battle with the world champion, "but other than that I think it was quite good.

"I was quite, quite happy when I saw the chequered flag," he admitted. "I didn't want to do another five laps like that. But I knew obviously in the places where you can't pass I can take it easy to try to maintain the tyres a little bit."

"I wasn't surprised," sighed the Briton. "The team put me on a two-stop, so I knew already when they put the medium on, that was going to be the case."