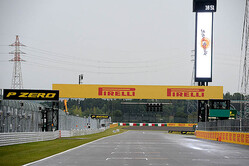 Due to the impending arrival of typhoon Hagibis, F1 took the wise decision to scrap all Saturday running in advance, rather than, as has previously been the case, waiting to see how things develop.

Now, not for the first time, qualifying will take place on Sunday morning, a few hours before the race.

However, with fears that the after effects of the typhoon could still compromise proceedings on Sunday morning, the FIA revealed that were this to be the case the grid order for the Grand Prix would be based on the results of Friday's second practice session.

As a result, fans witnessed more running than usual, as drivers had access to more tyres than usual, and the added bonus of drivers pushing that little bit harder with an eye on Sunday's grid.

At a time F1's powers-that-be are seeking to make changes to the format, some drivers believe that the sport can learn from this weekend.

"It's actually been a much better Friday," said Lewis Hamilton, who would start the race from the front row alongside teammate, Valtteri Bottas if the FP2 standings are used to decide the grid.

"Normally you only have two tyres per session," he continued, "but because we're obviously missing tomorrow, we brought all the tyres we had tomorrow, the two sets we'd have in the next session, into today.

"That's an interesting learning," he added. "Maybe they need to bring us more tyres in the race weekend and we can do three runs, we'd have three tyres in practice one and practice two and three in practice three.

"It would just be better for running, and better for the fans, because we run from the beginning of the session rather than wait 20 minutes and then go out."

"We went for it in FP2," said Romain Grosjean. "We actually used a good engine mode and actually I thought it was a really good format.

"If it is only Saturday and Sunday, with FP1 on Saturday morning and FP2 in the afternoon but setting the grid for the race it would be good," he continued. "You have to push, you have a good amount of tyres, and you can still fine tune the car, and there is the curfew in the evening so the mechanics don't go to bed too late.

"You can change a little bit the set-up between qualifying and the race so you can make it optimum for both sessions, I actually quite enjoyed it," said the Frenchman.

"If it needs to be changed I wouldn't mind seeing that. An hour-and-a-half, you've got tyres, you've got time. You need to do the long run in the afternoon, it is a more representative one but you also want to set some fast laps.