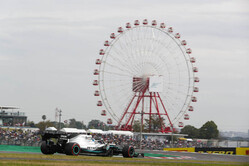 Ahead of today's second practice session the air temperature is 28 degrees C, while the track temperature is 32 degrees. It remains overcast, with a 40% chance of rain.

A pretty uneventful session, behind the Mercedes, Ferraris and Bulls, the McLarens and Racing Points took the remaining top ten positions.

With all Saturday action cancelled due to the imminent arrival of Typhoon Hagibis, during the break official took the almost unprecedented step of announcing that the times set in this session could decide Sunday's grid order.

Having handed his car over to Naoki Yamamoto earlier, Pierre Gasly will be keen to get in some decent running over the next ninety minutes.

The lights go green and Vettel is first out. While the German is on mediums, as is Giovinazzi, Russell heads out on hards, while the Haas duo and Norris are on softs.

Giovinazzi was sidelined for much of FP1 with a hydraulics issue.

As more drivers head out, in the Ferrari garage, Leclerc watched as his mechanics work on his car which is still on its stand.

Getting a nice two from Vettel on the pit straight, Bottas begins his first flying lap. Teammate Hamilton is also on track.

Albon goes fourth with a 30.098, the Thai driver sounding breathless as he converses with his engineer over the radio.

Breathless or not, the youngster subsequently splits the Mercedes pair with a 29.720.

As Verstappen appears ready to head out, so too Leclerc is now wearing his helmet and set to climb into his SF90.

Russell appears to have an issue, the Williams very, very slow through Spoon.

Twenty minutes in and Leclerc finally emerges, leaving Verstappen the only 'no show'. At which point the Dutchman heads out. The Ferrari on mediums while the Bull is on softs.

On fresh soft rubber, Vettel goes quickest in the first two sectors, maintaining the pace in S3 he crosses the line at 28.392 to go quickest.

About to start his first flying lap on the softs, Bottas pins at the chicane after taking too much kerb. Besides ruining his own lap, he ruins that of his teammate who was just behind.

Having done another cool down lap, Hamilton ramps up the pace, going quickest in the first two sectors and finally crossing the line at 27.896 to go quickest by 0.496s.

Now Leclerc is on the softs, the youngster posting PBs in all three sectors and finally crossing the line at 28.424 to go fourth.

Asked if he has seen any spots of rain, Verstappen replies: "No, nothing."

Bottas goes second (28.374) despite the wear and tear put on his tyres with that spin.

A 28.066 sees Verstappen, on fresh softs, split the Mercedes pair, the Dutchman just 0.170s down on Hamilton's pace.

However, moments later Hamilton, also on fresh softs, improves to 27.885, while Bottas goes quickest with a 27.785.

With FP3 scrapped, the teams have a few more sets of softs available, hence the extra running.

"We have an issue," Raikkonen is told, "slow down, slow down, go as slow as you can."

Renault is the first to switch to race simulation, Ricciardo on mediums and Hulkenberg on hards.

PBs in all three sectors see Sainz consolidate his seventh spot, the Spaniard taking a real pounding as he rides the kerbs at the final chicane.

Vettel begins a race sim on mediums, while his teammate is on softs. "Rears are going off," warns the German.

"We see deg on the Ferraris after six laps," Bottas is advised.

Though seventeenth on the timesheets, Gasly almost leads the way in terms of laps completed. The Frenchman has completed 28 laps, while Vettel has completed 31. Ricciardo is on 25, as is Russell, while Norris is on 24.

Having done some hot laps at the start of the session, with 14 minutes remaining Renault sends out its two drivers on fresh softs.

Hulkenberg has a worrying moment at the final chicane as he finds himself behind a slow Magnussen.

With seven minutes remaining, Hamilton pits for a change of nose and front wing.

Leclerc is in his garage, looking set for a final qualifying-style run. Indeed, we could see a number of drivers opt for a late charge, what with there being a good chance that this session will decide the grid order,

Race sims suggest, unsurprisingly, that Mercedes has the edge.

With 3:40 remaining, the Ferraris head out on fresh softs. "We appear to be in a bit of a poor spot, with cars ahead" warns Vettel, as he struggles with traffic.

Despite only posting two PBs, Leclerc improves to fourth with a 28.141. Vettel, who is plagued by traffic, fails to improve.

Whether this will constitute the grid on Sunday remains to be seen, for now it is a question of battening down the hatches.