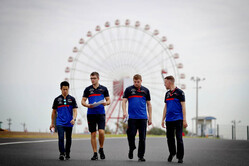 The FIA is "closely monitoring" Typhoon Hagibis, which is due to hit Japan on Saturday.

"The FIA, Formula 1, Suzuka Circuit and the Japanese Automobile Federation are closely monitoring Typhoon Hagibis and its potential impact on the 2019 FIA Formula 1 Japanese Grand Prix," read a brief statement issued by the FIA at 10:00 (local time) Thursday as the Suzuka weekend got underway.

"Every effort is being made to minimise disruption to the Formula 1 timetable, however the safety of the fans, competitors and everyone at the Suzuka Circuit remains the top priority.

"All parties will continue to monitor the situation and provide further updates in due course."

"As Typhoon Hagibis approaches, the chance of heavy downpours increases for qualifying," said meteorologist, John Hammond. "Rainfall may initially be quite intermittent, but in a pretty short space of time, the circuit could well become awash with water at times through the afternoon.

"Winds will increase dramatically through the day," he continued, "with the chance of gusts over 80 km/h (50 mph) as the storm gets near.

"Race day will become much quieter and largely sunny as Hagibis accelerates away from Suzuka."

In 2004, all Saturday track action had to be abandoned as Typhoon Ma-on battered the circuit, and as a result qualifying - which consisted of two sessions - had to be held on Sunday morning just hours before the race.

Again, in 2010, qualifying was held on Sunday, as conditions were so bad on Saturday that only two drivers were able to post times.

The 2014 event, again lashed by heavy rain, will forever be remembered for the incident which ultimately claimed the life of Jules Bianchi.