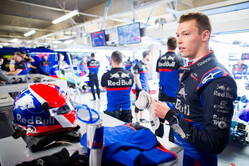 Pierre Gasly: "The Russian Grand Prix weekend wasn't the best for me, but I did think I could get some points until the VSC spoilt our strategy, as I'd already made my pitstop. However, I still feel as though things are going in the right direction so I am excited about the next race in Suzuka.

"This is one of the best tracks of the year, the most exciting in terms of driving. I reckon it has the best first sector of any circuit we visit, because it is a section where you get a real feel for what a Formula 1 car can do in terms of its speed and the aerodynamic downforce it has. On top of that, it's old-school with the gravel traps which mean you really can't afford to make a mistake or your race is over. It's definitely one of my favourites and it holds many memories too, from when I was racing in the Japanese Super Formula series, but also, each time I'm at Suzuka, my thoughts are of course always with Jules (Bianchi) because of what happened there. It's a Grand Prix that always generates strong emotions.

"There's another way in which this is one of the best Grands Prix, as it's here that I have always had so much support from the fans. It's heart-warming and a pleasure to see so many fans cheering us on. Being a Honda driver in Suzuka is really special because all the Japanese give you a lot of support. It's impressive and I'm keen to get back there. Last year, we toured several Honda factories and we also visited some this time before the race weekend. I was really struck by the strength of everyone's support for us and this year, with two teams using Honda PUs, Toro Rosso and Red Bull, I'm sure there will be an even bigger crowd. I think it's going to be a really special weekend."

Daniil Kvyat: "I enjoyed being in Russia because it's always special racing in front of your home fans, although it turned out to be a difficult weekend on track. I can be pleased with the way things went in the actual race, to finish twelfth after starting from the back proved we recovered well and were competitive. So I am taking those positive aspects into the next round in Japan, a race that is always one of the highlights of the season.

"I think Suzuka is a remarkable track. It is a high-speed circuit with some truly legendary corners. I'd say it's a track for the brave and corners like the Esses near the beginning of the lap, Degner 1 and Degner 2, the 130R on the way in, are all still a huge challenge, especially in the wet. That's why the drivers love this track as it sets the benchmark for how fast you can go in the highspeed corners. It's very cool and a matter of pride for us drivers to get these corners right. It is also enjoyable from an actual racing point of view as there are some opportunities for overtaking. It means that, over the years, the circuit has produced some great races.

"The atmosphere at the circuit is great and the Japanese fans make it truly unique. For us at Toro Rosso, it's a very special race because we are powered by Honda, so it will be a bit like a home race for the whole Red Bull family. It will make it a very exciting weekend with all the support from the local fans. I hope we can put on a really good show for them.

"Unfortunately, since I first raced at this track, back in 2014, I've never scored points so it's definitely time to score some this weekend and to do so with Honda would be special."