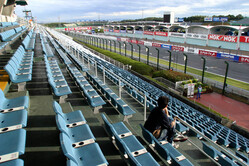 Other than a racers' circuit and some of the most passionate fans on the planet, Suzuka has seen its fair share of bad weather over the years.

In 2004, all Saturday track action had to be abandoned (pictured) as Typhoon Ma-on battered the circuit, and as a result qualifying - which consisted of two sessions back then - had to be held on Sunday morning just hours before the race.

While we remember the 1976 Grand Prix, which was held at Fuji, for the fact that James Hunt won the title after Niki Lauda, still recovering from his horrific Nurburgring crash, withdrew, the 2014 event, again lashed by heavy rain, will forever be remembered for the incident which ultimately claimed the life of Jules Bianchi.

Currently classed as a Category 5 Super Typhoon, Typhoon Hagibis, which is witnessing wind speeds in excess of 160 mph, is due to reach land on Saturday, initially hitting the southern island of Kyushu.

Currently classed as being of "violent" intensity this should lessen to "very strong" by the time it reaches land, with the Japan Meteorological Agency claiming that it could be "the strongest typhoon to hit Japan this year".

The FIA is understood to be monitoring the situation, as are organizers of the Rugby World Cup with two matches likely to be affected at the weekend.