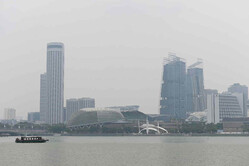 Just days ahead of the Singapore Grand Prix, the city-state is shrouded in a haze of toxic smoke which is described by the National Environment Agency as "unhealthy".

The smoke, which is the result of the burning of land for plantations in Indonesia, is an annual issue, worsened this year by the lack of significant rainfall.

"There has been a deterioration in the haze conditions in Singapore this afternoon," said the National Environment Agency (NEA) on Saturday. "This was due to a confluence of winds over the nearby region that led to more smoke haze from Sumatra being blown toward Singapore."

An update on Sunday revealed that the haze situation in Singapore "has gradually improved overnight due to the prevailing winds shifting to blow from the southeast.

"For the rest of the day, slightly hazy conditions are expected to continue and the prevailing winds are forecast to blow from the southeast or south," it added.

"Moderate to dense smoke haze continued to emanate from persistent hotspots in these provinces, and some smoke haze from Riau and Jambi has been blown by the prevailing winds to affect Singapore and parts of Peninsular Malaysia.

"For the next few days, the weather in Singapore is expected to be generally dry except for a few brief showers. Dry weather is forecast over central and southern Sumatra, and the haze situation there is expected to persist. The prevailing winds are forecast to blow from the southeast or south, and Singapore may still experience slightly hazy conditions.

"The health impact of haze is dependent on one's health status, the PSI level, and the length and intensity of outdoor activity. Reducing outdoor activities and physical exertion can help limit the ill effects from haze exposure. Given the air quality forecast for the next 24 hours, everyone can continue with normal activities. Persons who are not feeling well, especially the elderly and children, and those with chronic heart or lung conditions, should seek medical attention."

Grand Prix organisers in Singapore confirmed that the possibility of haze is one of the various potential issues covered in their contingency plan for this year's race.

"The plan was formulated and refined with stake holders, government bodies and the Formula One community," Singapore GP said in a statement, according to AFP.

"In the event that the haze causes visibility, public health or operational issues, Singapore GP would work closely with the relevant agencies before making any collective decisions regarding the event."

While the race is a week away, over the next 48 hours the teams will begin setting up their garages, and according to one source in Singapore the haze "is an issue".

"Visibility is an issue already and there is virtual no rain," said the source, revealing that there has been less than 14 days rain since January.

"The haze is persistent," they added. "I for one, developed today a related cough, and I hear more people in the crowds having coughs. All mouth-masks were sold out yesterday, (though) more were made available today."

On Monday, our source reports: "This morning, the moon was bright in the late-night sky, no haze-halo could be seen.

"There is still a lot of coughing going around though," they added. "The sky looks relatively blue, thirty minutes after sunrise.

"No visible rain was recorded in Sumatra Island, the source of the smoke, and "air quality has improved significantly.

"Not saying that it's over, but the fires have not increased and the wind has shifted. We should see, today and tomorrow, a reduction in fires to put this to rest."