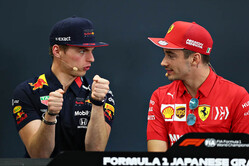 As Typhoon Hagibis heads towards the Japan mainland, the FIA has said it is monitoring the situation closely. With heavy rain and high winds expected to his the circuit, the Japanese authorities may well make the call as to whether Suzuka should open on Saturday - the day the typhoon will hit - though the drivers have called on the FIA to make a decision sooner rather than later.

Already two of three planned Rugby World Cup matches scheduled for Saturday have been cancelled, one due to take place in Nagoya, not far from Suzuka.

"It's pretty clear if the typhoon is going to come here, there is no way we can drive," said Charles Leclerc. "Of my previous experience, I have only done one year and a half in Formula 1, but they have always been quite safe with the conditions. They always asked what we thought about the track once we were in the car. So I'm happy. We will see."

"It's going to be very clear anyway if it is possible or not," added Max Verstappen. "At the moment, it doesn't really look very likely on Saturday. Sunday looks fine. But yeah, let's see."

When the Dutchman said that cancelling Saturday in advance would allow him the day free, Carlos Sainz suggested they play FIFA, a proposal that appeared to go down well with the Red Bull driver.

"I don't think anyone wants to put anyone's life in danger," said Sebastian Vettel. "So I think we need to keep things on the ground.

There is a forecast, but how many times have forecasts changed? I don't know. Currently it sits at 100% so it's quite clear. But I think we see what happens throughout the weekend, it's the same thing, if we have a lot of rain in other places, then there is a red flag and maybe the light might never switch to green.

"It would make sense if by tomorrow at night, I believe if there is more evidence to give a proposal, or take an action for Saturday, thinking not for us, as it's cosy in the garage, but for all the people to be around the track is not so nice, if you sit there if there's 80kph of winds blasting in your face."