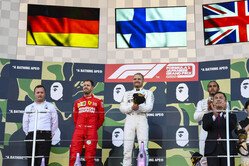 Q: Congratulations Valtteri. Qualifying P3 in Suzuka you don't expect to lead into Turn 1 but Sebastian made a mistake, you pounced on it and you absolutely dominated that race in classic style. You must be delighted with that?
Valtteri Bottas: I'm very happy. Obviously it was a pretty close qualifying and yeah starting third here is never, but there's not point ever to give up on anything and I knew anything was possible today and opportunities were there today and the first one was at the start. I had a really nice start and obviously Sebastian had an issue, so managed to get in the lead and then the pace was super good. I could really control the race. I really enjoyed it and had fun, so yeah, very, very happy.

Q: Were you a little bit worried when they pulled you into the pits and said you were on a two-stop strategy or was that always the plan? Or did you think you were going to have to overtake Lewis?
VB: Yeah, we knew that one or two stops were both possible and that there was not a massive difference between the two of them. We knew if could be a scenario. That really went smooth. I could really control it when I could and push when I wanted. Nice.

Q: And to top off the day, Mercedes just won their sixth Constructors' title in a row. You must be delighted with that?
VB: Yeah, really proud to be part of the team. A sixth title in a row is so impressive, so very proud of every single team member, here at the race team and also at the factory. Well done guys and girls.

Q: Well done Valtteri. Enjoy the evening. Sebastian, congratulations, I know after qualifying you put it on pole position, but I have to talk about the start - what happened? You moved and had to stop. Was that a mistake on your behalf?
Sebastian Vettel: Yeah, I mean the lights were on a long time, but it was my mistake, so I lost the momentum them. So I ended up worse than just having a poor start, it was a really poor start. Then it was difficult because Mercedes was quite quick in the race, especially at the back of the stint, they had more pace than us. Yeah, Valtteri was flying, literally, at the end of the first stint. Obviously Lewis tried to do one stop and I guess it didn't work and in the end I knew that he would come out behind and I just paced myself around all the bits in the track where I could and just tried to get good exits in the places where he could be a threat. So that worked but, yeah, it was obviously a tough afternoon to then maintain second.

Q: Do you think if you hadn't made that mistake at the start the win was possible?
SV: I don't know, because then they can obviously play a lot more the tactics, so obviously that way they had one car comfortably in the lead and Valtteri was out... we weren't a threat to him. But yeah I think with the lack of pace today, probably second was probably the maximum, but surely I'm not happy with the very first start of the race but after that it was fine, but as I said we just lacked a little bit of pace. But overall it's been a positive day, everything packed in one day and to get pole and second today is reasonable. It's a bit of a shame. I don't know what happened to Charles, otherwise we could have maybe had both cars to challenge them a bit more.

Q: Lewis, I know everything you did today you never really got let loose, you were always kind of in the mix, but when you were free you had the pace and a challenge all the way to the end.
Lewis Hamilton: Yeah, well firstly it's congratulations to the team, so well deserved. To win it six years in a row, the Constructors' Championship, is the main point. I really just wanted to get the best points for my team today.

Q: Looking ahead: now that it's down to the Drivers', do you suspect that you and Valtteri will be battling all the way a bit more freely now that the Constructors' is over and over and done?
LH: It makes no difference because we've been racing freely all year.

Q: Yeah, but it will be a hard fight all the way to the end?
LH: For sure.

Q: Valtteri, great race by you today. Can we start by talking about the start? How good was it, almost as good as Austria 2017?
VB: Not quite. I think nothing compares to that. Sebastian nearly had as good as that one I think. But I did have a very, very good start. But for sure it looks better if there are cars around that don't have a good start and very much needed, because we knew we had a good race car here with a good pace but if you are behind other cars you can't really use it that much. I was very happy to get to the lead and obviously it's quite different being in the lead and being able to control and on this track [being] in the free air makes a difference so I really enjoyed it.

Q: Once in the lead did you have any other concerns during the race?
VB: Everything was going pretty smooth. Just the second stint was full of traffic, so I was overtaking backmarkers all the time, so I couldn't really have good rhythm and very good pace in that stint.

SV: You could have slowed down.

VB: Yeah... I didn't want to. Yeah, when Lewis didn't stop for his second stop I was slightly concerned that maybe his tyres would last to the end and he could actually make it, because he had a decent gap to me. But obviously he was on the medium and I think that tyres would have struggled massively at the end. So, from my side, obviously a very good race and on top of that very, very happy for every single team member, getting the sixth Constructors' title. Really well deserved. It's not just the result today but all through the season so very, very proud.

Q: Very well done. Sebastian can we start at the start? What happened from your point of view?
SV: Well obviously I had a poor start so I lost quite a lot of momentum when the lights go off. A mistake on my side. I had it in my hands, literally, to perform a good start - normally starts are really strong - but obviously today we didn't get it right. I don't know what happened to Charles but we both missed out on the start maybe for different reasons. After that we knew it was going to be a difficult race. Overtaking isn't straightforward here and obviously in terms of pace it was very difficult. We could see in the first stint that Valtteri was just quicker, especially towards the end, and then Lewis was catching. He was basically very close to me when we pitted, so I think overall we got the strategy right to stay ahead. I don't know if... maybe they didn't get it entirely right. But not the day we wanted if you start first and second. I don't know where Charles finished. Sixth? Did he? So second and sixth.

Q: Were you concerned about getting a penalty for the start?
SV: I don't know. Not really. Obviously I had a very poor start in general...

SV: No I didn't. If you jump the start then obviously you get caught, so I think it was just fine.

Q: And Sebastian, we saw a thrilling battle between you and Lewis at the end of the race. How much did you enjoy that?
SV: I was surprised when they pitted to be honest. I expected him to stay out and try the one stop. Once I knew that.. also before, Valtteri was so far away and we were not fast and it was not possible to catch him, so when he came out I was not rushing to open the gap, I was just trying to keep my tyres somehow fresh to make sure that if he arrives then everything is still in good shape and I have the chance to have good corner exits and play the advantage we have down the straights, which worked. It got a bit close once with traffic but other than that I think it was quite good. I was quite quite happy when I saw the chequered flag. I didn't want to do another five laps like that. But I knew obviously in the places where you can't pass I can take it easy to try to maintain the tyres a little bit.

Q: Lewis, coming on to you, Sebastian was surprised that you came in for your second stop. How surprised were you to be called in?
LH: I wasn't surprised. The team put me on a two-stop, so I knew already when they put the medium on, that was going to be the case.

Q: Do you think, as the race played out, you could have got to the end on that one-stop?
LH: With better guidance I think I probably could have. They said, when they put the tyre on, that we are going a two stop because the degradation is high. So then, just the direction I was given in terms of having to try and close the gap to Seb. So every time I was having to close this gap, so used the tyres quite a lot. So, in how I was using them, there was no way I was going to make it to the end on that. If I had, from the beginning, said we're just going to eke it out and just see if we could manage it, then I could have just driven differently and, potentially, held it to the end - but all in hindsight.