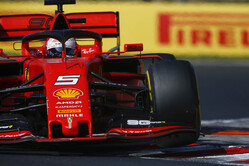 As he waited on pole for the start lights to go out, Sebastian Vettel was clearly seen moving a little and then stopping.

While he subsequently made a poor start, allowing Valtteri Bottas to pass him on the left and lead the field into Turn 1, the stewards investigated the German's previous movement.

Following an investigation the stewards deemed that Vettel had not jumped the start, which was naturally greeted with groans by those convinced of Ferrari bias.

Explaining their decision, which involved reviewing the video evidence and the jump-start report based on data from the FIA approved and supplied transponder fitted to each car, the stewards deemed that "whilst the video shows some movement that movement was within the acceptable tolerance of the F1 jump start system which formerly defines a jump start per Article 36.13(a) of the FIA Formula One Sporting Regulations."

As a result it was decided that no further action was necessary.

"The lights were on a long time but it was my mistake, so I lost the momentum there," the German subsequently told reporters. "I ended up worse than just having a poor start... it was a really poor start.

"And then it was difficult because Mercedes was quite quick in the race, the back end of the stint they had more pace than us."

Asked if, without the mistake, he could have won, he admitted: "I don't know because that way they can play a lot more the tactics.

"With the lack of pace today, second was the maximum," he added, "but sure I am not happy with the very first start of the race."