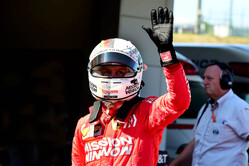 With bright sunshine and barely a cloud in the sky, it's hard to believe that the region was hit by a typhoon - indeed, a super typhoon - yesterday, though while the track is dry, it remains quite windy.

Charles Leclerc admitted to being "surprised" by the deficit to Mercedes on Friday, even Max Verstappen managing to show the Monegasque a clean pair of heels. On the longer runs also the Silver Arrows appeared to have the edge.

One team delighted that the weather has brightened is Renault, which was out of synch with its rivals in FP2 opting to leave its qualifying runs until the end when the track was busiest. As it stood, had today's session been abandoned the French cars would have lined up 17th and 18th.

McLaren looked strong on Friday and is likely to be best of the rest today, with Toro Rosso also looking good. Sergio Perez and Kimi Raikkonen were also in the mix for Racing Point and Alfa Romeo respectively.

As ever, the fans are up for it, the typhoon clearly having failed to dampen their spirits.

The lights go green and the Ferraris are first out, followed by Sainz, Norris and Hulkenberg. As more drivers emerge. Most are on softs, but the Ferraris and McLarens are on hards.

Before a single driver has started a flying lap, the session is red-flagged when Kubica goes off and into the barriers as he exits the final corner. Replay shows the Pole ran a little wide got his left-front onto the grass... the still very damp grass. There is a very strong cross-wind at that point of the circuit, so that could have been a factor.

With the race less than four hours away the crew face a mammoth task repairing his car. Their task is not helped by the fact there is a well-publicised shortage of spares. Meanwhile, with typical Japanese efficiency, the damaged barrier is repaired.

The session resumes with 15 minutes remaining and once again the Ferraris are among the first out, the Alfa pair are ahead of them. This time around everyone is on the red-banded rubber.

Still no sign of Verstappen or the Mercedes pair heading out. Of course, with all Friday's rubber having been washed away they are wise to wait.

Oh dear, another red flag, this time for Magnussen who is off and in the barrier at Turn 1. However, the Dane is able to find reverse and head back on to the track, albeit minus his front wing. Replay suggest that the cross wind played a part in his off also. It also reveals that he hit the barriers with the rear of the car first before spinning around.

The red flag is bad news for Ferrari whose two drivers were forced to abort their flying laps. The Silver Arrows and Verstappen were on track also but were still on the out laps.

Magnussen gets back to the pits and his crew swarm all over it. There is 11:42 remaining.

As it stands, there are just seven names on the board.

Again, the session resumes. Hulkenberg heads the queue at the end of the pitlane, with Bottas and Hamilton behind.

With limited time and everyone eager to post a banker time, it is very, very busy, with the drivers lapping in one long train.

There are a lot of frustrated drivers out there, not least Vettel who is stuck behind Norris.

Early days, but nobody expected Ferrari to have the edge on Mercedes, and even the Bulls and Sainz ahead of the Silver Arrows, who appeared to have a much clearer lap.

With 5:25 remaining, Grosjean is the only driver still running yet to post a time.

Perez and Raikkonen are in the drop zone, with Russell, Stroll and Giovinazzi hovering.

Hamilton improves to second with a 28.735, while Bottas posts 28.896 to go fourth. In the Mercedes garage, Toto Wolff looks less than impressed.

As the clock ticks down all but the Ferraris and Verstappen are on track.

Norris goes fourth and Gasly ninth, while Kvyat fails to improve on 15th.

We lose Ricciardo, Perez, Russell, Magnussen and Kubica, the Australian and the Mexican both having compromised their laps in the very first sector.

Q2 gets the green light but as is so often the case there are no immediate takers.

Almost two minutes in, Leclerc gets proceedings underway, followed by the Alfas.

"Why are the tyres so cold," asks Leclerc. "They should be ready by the start of the lap," he is told.

As Leclerc completes his first flying lap (28.719), he passes a slow Grosjean and Albon on the approach to the final chicane.

Vettel posts 28.174, and while Raikkonen and Gasly go third and fourth, Hamilton looks to be on a very, very quick lap.

"No power, no power," complains Verstappen, "you can really feel it on the back straight."

Meanwhile, Sainz goes seventh with a 29.075, just ahead of Raikkonen.

On 30.112, Hulkenberg is not looking likely to make much more progress as Renault's difficult weekend continues.

Gasly, who is in the drop zone with Kvyat, Giovinazzi, Stroll and Hulkenberg, is clearly eager to be allowed out early in order to avoid the late rush.

As the final assault gets underway, Vettel nips off for an, ahem, 'comfort break'.

All are on track bar the Ferrari pair, who clearly feel they are safe.

Albon posts a very impressive 30.594 in the first sector, with only Hamilton going quicker.

Raikkonen fails to improve, as does Stroll, while Albon goes second with a 28.156.

Hamilton goes quickest with a 27.826 but is demoted by his Mercedes teammate who crosses the line at 27.688.