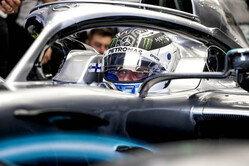 Unless there is a major upset - we're talking Lewis Hamilton suffering his first DNF of the season - the Briton should leave Japan on Sunday night with only one driver mathematically capable of beating him to the title... teammate Valtteri Bottas.

With a 73 point deficit to Hamilton, Bottas will need to rediscover the sort of form witnessed in Australia and Baku, and while team boss has described the upgrades brought to Japan as "minor", the Finn is hoping they will provide a "decent step" in terms of performance.

"We have a pretty solid update package this weekend," he told reporters. "Obviously getting to try that tomorrow, how it works, but in theory, yes it should give us more performance.

"How much actually, that's something we'll find out," he admitted. "We have some rough numbers about it but should be a decent step in terms of if we're talking about upgrade packages so far. We shall see."

In Russia, having scored a surprise 1-2, Wolff admitted that due to the W10's dominance in the opening half of the season, upgrades had been few and far between. However, with Ferrari scoring victory in the successive races after the break, the German team had to react.

"It's been a pretty good car this year, but it is again a track with a mixture of different things," said Bottas, as he looked ahead to the weekend. "There are some decent straights where we definitely have a disadvantage compared to Ferrari, so they're going to be gaining time to us there.

"But there's some good sections full of corners, which we know we are good in, and hopefully with the upgrade package will be even better.

"We've already in the second half had tracks that we thought they should be quite good for us, and they've been able to beat us. For sure, if they perform better than us here, it means we need to work harder if we're going to be beating them next year."