No further significant updates for Ferrari 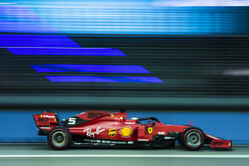 Barring the mother of all upsets, Mercedes and Lewis Hamilton have won the 2019 titles, the Briton's sixth and the German manufacturer's fifth.

All that remains is exactly when the pair will wrap them up.

Since the summer break, Ferrari has given the German team a scare, claiming three successive wins and four successive poles, but other than the intra-team squabbles, as far as the Maranello outfit is concerned in the great scheme of things it was too little, too late.

Benefitting from significant engine and aero upgrades, Ferrari certainly gave Mercedes a late scare, the German manufacturer admitting that it is losing seven or eight tenths to the Italian team on the straights of track like Sochi at the weekend.

However, despite the fact that it is still mathematically possible for Ferrari to cause an upset, sporting director, Laurent Mekies admits that there will be no further significant upgrades this year.

"It's that time of the year when we are all switching our attentions to 2020," said the Frenchman, "so I don't think there will be anything significant from now until the end of the season.

"On top of that, you also need to start to thinking about what's going to happen next. So there won't be anything significant anymore."

"I would say that we are really now focused mainly on next year's car, back at the factory," added team boss, Mattia Binotto. "If there are any updates this season, they will not be as major as the one we had in Singapore."