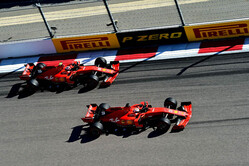 As Sebastian Vettel roared of the start-line on Sunday, first passing Lewis Hamilton and then Charles Leclerc, it soon became clear that all was not what it appeared.

As millions of race fans around the world salivated at the thought of a three-way battle featuring three of the sport's biggest names, a series of radio messages revealed that, in terms of Ferrari, the result had been decided before the start lights had even gone out.

Fearing the threat from Lewis Hamilton, an agreement had been made between the Ferrari drivers that Leclerc would give his teammate a tow off the line and into Turn 1, even to the point of offering no resistance when Vettel passed him. And in return, the German would subsequently hand the position back to his teammate. Cushty.

At least, that was the plan.

However, ignoring the fact that Vettel was starting directly behind Leclerc, and therefore almost guaranteed to get the tow, as long as he was quick off the line and prevented Hamilton taking advantage, the fact is that the four-time world champion made a lighting start and believed his subsequent passing of both drivers was down to him.

And then, as was the case a week earlier in Singapore, the radio messages began, and the whole sorry mess, for the second successive race was played out in public.

Despite Ferrari's best PR efforts, it is clear that like Houston, Maranello has a problem.

F1 managing director, Ross Brawn, who oversaw all Michael Schumacher's titles, including the five with Ferrari, believes the situation at Maranello is "potentially explosive".

Team boss, Mattia Binotto, "will have work to do in the next few days to pour oil on what seem like turbulent waters" says Brawn in his summing-up of the Russian Grand Prix.

"On the one hand they have a four-time world champion who is still one of the finest drivers on the grid, despite a few too many mistakes over the past two seasons, and on the other, they have an incredible talent in Charles Leclerc, after all you don't take six poles, including four in a row, and win two races at legendary circuits such as Spa and Monza if you're not a star in the making," added the Briton.

"It's a potentially explosive combination and needs careful handling," he warns.

"Of course, Mattia is well aware of how this kind of dynamic can work as he has experienced it before when he was a young engineer," he added. "But now the honour and obligation falls to him to make sure that mechanism that drives what can be healthy rivalry runs smoothly."

A few months back, some were calling for Binotto to be fired, as a series of reliability issues and poor strategy had the Italian team heading into the summer break without a single win.

Now, having turned the team's fortunes around, Leclerc and Vettel scoring three successive wins, he is, certainly as far as the Italian media concerned, flavour of the month.

However, Binotto is an engineer, a bloody good one, and is unlikely to have the required skills to deal with the current situation at Maranello, a situation that needs heads banging together.

Furthermore, in allowing these pre-race agreements, Ferrari is seriously short-changing the fans, who want to see the races decided on track, wheel to wheel, undercutting and overcutting, out-braking and slipstreaming, not decided in the team motorhome the night before.

Of course, the sceptic might wonder if the legendary Turk Thrust has revived the Formula One Script Unit, for Chase Carey and the gang must be delighted with the current Ferrari feuding, not to mention the Maranello outfit's late-summer revival and the threat to Mercedes and Lewis Hamilton's superiority that appeared to come from nowhere.

As Bernie used to say, 'all publicity is good publicity', and everyone's talking F1 at the moment.