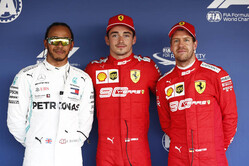 Charles, all I can say is, wow! What a dominant performance. All of the way through practice, yesterday, today, qualifying - you really are on a role.
Charles Leclerc: Yeah, the car felt amazing. It definitely feels great to be back on pole. I don't know if it's the best track to start on pole. The straight is very long after the start. Tomorrow the start will be very important as always, but here probably even more, because of the straight length.

It's still the best place to be in. The last person to score four [consecutive] pole positions for Ferrari was Michael Schumacher. That must make you feel pretty special?
CL: Yeah it definitely feels very, very special, but I don't really want to think about those kind of stats for now. I just want to focus on the job. There's still a long way to go until tomorrow. It's definitely a good start, we've been competitive all weekend long and the race simulation seems positive too, so it's looking good for tomorrow.

Congratulations. Lewis, I must say, all the way through qualifying, obviously the Ferraris have had the upper hand, but as always you pulled the lap out there at the end and got the best out of the car?
Lewis Hamilton: I'll tell you, it was a tough qualifying session, because these guys have some crazy speeds on the straights. They go to another level, you know. That whole party mode you talked about us having, they have something else beyond that - jet mode! Nonetheless, I gave it absolutely everything I had at the end and the team did such a great job to just tinker and push forwards. I'm so glad it came together. I wasn't expecting to get on the front row for sure, so I'm really, really happy with it nonetheless.

And the great thing for you guys also is that you have the medium tyres for the start of the race. It looks like you knew they would be quick in qualifying so you've gone for a slightly different strategy for the race.
LH: Yeah, well we know that they are on a slightly lower drag level this weekend plus they have that power, so we've got to try something. You've seen the last couple of races we've been behind all the way, so we're fortunate enough to opt for another strategy and I think the team have done a really good job with putting us in that position. It's a long way down to Turn 1, so it's not always the best for starts on the harder tyre, but I'm going to try to two the hell out of Charles if I get the chance. But it's going to be hard because they get good starts as well.

Sebastian, not the easiest qualifying I'm sure. Q1 was pretty tricky: one little mistake and all hell broke loose after that. But, P3, you've got the run down to Turn 1 and I'm sure that after the last race, with the strategy and winning that race, there are still a lot of opportunities tomorrow?
Sebastian Vettel: Yeah, definitely. Obviously I'm not entirely happy, I think I couldn't extract the absolute maximum from the car. As you said, it was a bit disruptive in Q1 but by the time we got to Q3 I thought it was OK. You spoke about Turn 1, it's a long way, obviously we'll see. We're on different tyres strategies compared to the Mercs, so I think the race will be decided tomorrow. The speed is there so let's keep it up.

As you said, there's a long straight down to Turn 2. You guys are pretty quick in a straight line too. For us it's going to be great watching, but it's going to be pretty crazy for you guys into Turn 2?
SV: Yeah, first you need a good start; then you worry about the rest, sort of thing. Let's see. Obviously there's potentially an advantage if you are behind but I guess if you are behind you always tend to say that, so let's see what happens.

Charles, you got progressively quicker as the session went on. Where were you finding the time?
CL: I don't think I had any clean laps before the one of Q3. The first lap of Q3 felt very good. The second lap: very good until Turn 16, where I lost rears, and I lost a little bit of lap time. But overall the car was just coming together. The balance was better and better. I was adjusting a little bit the aero balance and I just felt more and more confident.

And what about your confidence for tomorrow's race - the long run pace of your car?
CL: I believe that the long run pace yesterday was extremely positive, I think probably the most positive of the whole season, so this is looking good. But it's going to be an interesting race. I mean, Mercedes are starting on the medium, so I think the strategy will play a role. I think we did the right choice to start on the soft, but we will see tomorrow.

Good luck with that and well done today. Lewis, if we could come on to you. You sounded very happy at the end of the session, happy to split the Ferraris for the second week in a row. How good was your lap?
LH: Pretty decent. It was a pretty good lap. Honestly, it was a really good lap. Last time, Singapore felt like a really good lap as well, it's just... I was just saying to Charles out there that already by Turn 1 we were already three tenths down or something like that, so it's very, very hard. But nonetheless I pushed, we pushed, as hard as we could and I was really, really happy with the lap. It all came together. That last one was the best of the weekend - as it should be - and no mistakes or anything like that, so I really feel like I got everything and maybe a little bit more from the car to split the Ferraris once again, which is not an easy task.

Charles thinks it's going to be a strategic battle tomorrow. Do you feel the same way?
LH: Yeah. Yeah, definitely. I think the team did a great job to put us on the mediums and naturally from the two tyres there's obviously a delta and the softer the tyre the better the start. So it will be a little bit tough off the start tomorrow. But even if we were in the lead, if we were on pole for example, they are just so fast on the straights by the time we get to Turn 1, which is the little kink, they blast past us with the jet fuel or whatever it is. So, yeah, it is about strategy, which is why we are on a different tyre and I hope that we can utilise that and keep the pressure on. If you've seen the couple of races we've had we've been right with them but I'm hoping tomorrow we can really give them a good fight.

Sebastian, coming to you, it seemed a good opening lap of Q3 for you but then it seems to slip away on that second lap. Is that a fair assessment?
SV: Not really. I was quite happy in general. Obviously a bit disruptive with Q1 where we got a bit unfortunate with yellow flags and stuff. I thought by the time we got to Q3 that was fine. I think overall I was pretty happy with the car. I just felt that there was more in the car that, yeah, I couldn't get to. Nevertheless, I think tomorrow is a long race. I think we have good pace for the race. It will be very interesting with the Mercedes on different tyres to start with, so let's see what happens.

(Frederic Ferret - L'Equipe) Lewis, how important was it to be on the first row for tomorrow's race? And would it be crucial to be at the second corner first, before the Ferraris to avoid what happened last week in Singapore?
LH: Time will tell. But, of course, if I'm able to try and somehow keep Seb behind, and there's only one car ahead, for example, that changes things on top. So, naturally we're going to push as hard as we can but it's going to be very, very hard. Down to Turn One it's a long drag - but I'm sure we'll have a good battle, one way or another.

(Christian Menath - motorsport-magazin.com) Question for all three of you. You all sounded pretty confident that you're on the right tyre, even though you have different ones. Can you explain why you are confident this is the right tyre you're starting on? Do you think this has to do with the car that the tyre suits better to your car - or is it only strategic reasons?
CL: On our side I think the start is very important here and we thought that the benefits of starting on Soft was big. And then there was not much difference, in terms of degradation, from the Soft to the Medium. So, yeah, we thought it was worth it to make it our start tyre.

LH: I just wanted to be on something different.

Is that what it now takes to beat these guys? You've got to roll the dice?
LH: I don't know. I haven't beaten them for a while! So I can't tell you. I'll tell you at the end of tomorrow.

(Scott Mitchell - Autosport) To all three. Charles, this is your fourth pole in a row. You were asked downstairs, you're the first person to do that for Ferrari since Michael, which is obviously pretty special. Are you on a roll at the moment in qualifying where you feel like you can't do anything wrong, and everything comes together. And to Lewis and Seb, you've both had massive success in Formula One, been on this sort of run - what does it do for you as a driver when you have this sort of succession of poles?
CL: Of course I felt confident going into qualifying but at the end anything... I mean at one point it's going to end, so whether it's now or later, I don't know. So, the only thing I'm trying to do is focus on myself, try to have exactly the same procedure as I've had since the last four races and not... yeah, I definitely don't come in the car thinking it will be easy and that it will come together alone. I just try to keep working as I did in the last few races, and then hopefully the lap time comes.

Lewis, how does it feel? The importance of momentum, invincibility when you're on a roll?
LH: I don't know - I've never felt invincible. Of course, when you get on a roll, it doesn't really make... from my experience, it's nice, for sure but it doesn't make a difference. So if it's separated: one pole; one second; one pole, it doesn't make any difference to me. But he's stealing all the poles right now, so it's going to be very, very hard to beat their poles when they're so fast on the straights but we're working at it.

SV: I don't know - it's been a while for me! Yeah, I think you take every session separately, so you're not really trying to look back. I think it's just about nailing every session.