The trust is still there, insists Leclerc 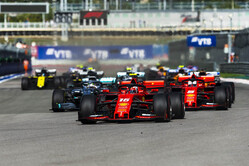 It's a debate that is sure to polarise many race fans, and while Sebastian Vettel has history in terms of reneging on agreements with teammate, many feel his lead at the start of today's Grand Prix was on merit.

Whatever the rights and wrongs of Ferrari allowing such an agreement to be made however, the fact is that two successive races have been marred by intra-team squabbling.

While Mattia Binotto sought to explain today's agreement to the media, Leclerc insists that today's events will not damage his relationship with Vettel, and that he still trusts the German to honour such agreements.

In the wake of today's events, when asked if he still trusts Vettel, Leclerc said: "Yes, I think the trust doesn't change and I think we need to trust each other, Seb and myself.

"It's hugely important for the benefit of the team in some situation, to know that you can count on the other car and vice versa," he continued. "So, yeah, I think it's very important, but yes, the trust is still here."

Asked about the start, he said: "I obviously went to the left to give Seb the slipstream, I knew he would overtake, and anyway we knew that, then we just had to do the swap back and we did it at the pitstop later on in the race."

Asked if the agreement concerned him holding position and not resisting Vettel on the run to Turn 2, he said: "If there was Lewis and Seb side by side, I obviously had to advantage Seb and not Lewis, which is normal. So, that was what was agreed.

"There was a safety car straight away," he continued, "so then it was quite difficult. I tried to stay as close as I possibly could, for two or three laps, but then it was very difficult to follow, especially the first and second sectors, the tyres overheated, and then I dropped back a little bit.

"But then I was, as I said on the radio, I had one hundred percent trust in the team to do it themselves as it was agreed before the race, and that's what they did at the pitstop."

Vettel on the other hand, was giving little away.

"I think I stuck to the agreement," he told Sky Sports. "Obviously it was a big shame because I think we had a good chance today to finish first and second."

Asked to explain the agreement, he replied: "I think on my side it's best if I don't say anything. I think Mattia gave an explanation which is valid, so leave it there."

Pushed on whether he would have allowed Leclerc through, had the situation remained 'as was' until much later in the race, he said: "Obviously, I don't know what happened, I wasn't really aware when Charles was going to pit, because obviously you do your own race.

"I was aware of the fact I was quite a bit down the road," he continued. "And obviously the last laps before the pit stop I was struggling more and more with the tyres. So I realised that obviously it would be time to pit.

"When I got out, I found myself behind, then I had a problem and so on, and obviously the bigger downside was the fact that we had to retire. It didn't come to that stage, so it's a bit pointless to discuss."

All this aside, with Formula One partnering with betting companies it remains to be seen how punters will react to such pre-race agreements, indeed surely all F1 fans are being short-changed when teams are essentially deciding who will win and how before the lights have even gone out.