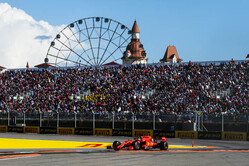 Following the numerous messages between the Ferrari drivers and the pit-wall, the dust appeared to have settled when Sebastian Vettel pitted four laps after his teammate.

While the German was now behind Leclerc, leaving fans salivating at the prospect of a Battle Royale between the feuding Ferraris, Vettel subsequently reported an issue with his MGU-K.

First he began to slow and then stopped entirely, and as the VSC was deployed, Lewis Hamilton and his teammate made their sole stops of the race. While Valtteri Bottas rejoined behind Leclerc, who was to make a second stop just two laps later, Hamilton retained a race lead he was never to relinquish.

After the race, Binotto was asked why Vettel parked the car, leading to the VSC deployment that turned the race on its head and effectively cost his teammate victory.

"We'd got a problem on the power unit, on the hybrid side of the power unit, and we got a loss of insulation on the car," he told reporters. "For safety reasons, we called Seb to stop immediately.

"Of course it's a shame, because 100 metres later was the pit lane," he continued, "but it was the safest action we could do for Seb, and the safety aspects.

"If it would have been for the rest of the car we maybe would have stopped in a different position but it was an instruction to stop as soon as you can because of safety."

The retirement marked Vettel's first DNF of the season.