Hamilton wins as Ferrari screws up 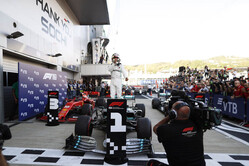 As much is rightly made of Charles Leclerc becoming the first Ferrari driver to score four successive poles since Michael Schumacher, it's worth remembering that that legendary partnership's reign eventually came to an end... as all reigns must do.

Mercedes has had a momentous run of success, its achievements quite the match of Ferrari at its peak, and who is to say that the German team and its star driver won't equal Schumacher's record in terms of titles and surpass the Italian team in terms of successive titles.

While we have grown tired of Toto Wolff's constant claims of being the underdog, in recent weeks it has had more than a hint of truth about it.

Though he dug deep and produced a sensational lap yesterday, wasn't it telling when Lewis, told the gap to Leclerc, expressed doubt that he could significantly close it.

With six races remaining it would take not only a gargantuan effort from Leclerc and Ferrari to claim the title, but a major turn-around in fortune for Mercedes and Hamilton to lose it.

Still smarting from last year's team orders, Valtteri Bottas will have to be the team player today, and possibly in all the remaining races, if Hamilton is to maintain his lead, though isn't that why the Finn was retained.

Other than starting on the medium rubber, a move which will allow him to run longer in its opening stint, Hamilton will be relying on the mother of all tows from Leclerc as the field heads through the kink that is Turn 1 and on towards Turn 2 at the start of today's race.

And then, it will be 'fingers crossed' that there is no silliness going on behind.

While all Leclerc has to do it got off the line well and get on with it, teammate Vettel will be seeking to follow up his Singapore win with another.

Though Bottas will be required to play ball in teams of aiding his teammate, there will be no such requirements of the German.

With many still questioning his Singapore win, Vettel will be keen to prove the sceptics (and himself) wrong, and what better way than to score back-to-back victories.

One couldn't help but feel for him yesterday, as every time he produced a good lap, his talented young teammate responded with another blistering lap that defied belief.

Despite the various plot twists in terms of Ferrari and Mercedes, as ever, it is the battle going on behind that will witness the real action.

While we have McLaren and Renault involved in their own duel, with Romain Grosjean adding some extra spice, courtesy of his grid penalty, Max Verstappen starts from ninth, and his efforts alone should be worth the price of admission.

And further back, all three contenders for the second Red Bull seat in 2020 have the chance to set out their stall for Mr Marko, though any early impatience or over eagerness could see them blot their copybooks once and for all.

One man who one must feel total sympathy for is Daniil Kvyat - and his many supporters. Even before arriving here the Russian knew he would be starting from the back of the grid, and since then things have literally gone from bad to worse.

Here's hoping he can give a typically spirited performance today.

As we have said so many times, races cannot be won at the first corner, but they can be lost... and also at the second corner. And that long, long run to Turn 2, as it positively invites drivers to push ever-harder, is always an accident waiting to happen.

As we know, the Mercedes pair are starting on the mediums, which will allow them to go for a longer first stint, but that will count for nothing if the Ferraris use their obvious power advantage to get away at the start. Though the Silver Arrows have superior race pace, that counts for nothing if they are stuck behind the SF90s.

In terms of tyre strategy, the fastest option is to start on the softs for 15 to 19 laps and then go to the hards. In practice, there might be an advantage to start on the mediums instead for 14 to 22 laps and subsequently switch to the hards. This strategy also offers more flexibility in the event of a safety car, for example.

A slightly slower one-stopper is to start on the softs for 22 to 26 laps and then switch to the mediums for the rest of the race: this would probably require some degree of pace management.

The pitlane opens, and one by one the drivers head out. Air temperature is 22 degrees C, while the track temperature is 33.9 degrees. It is bright and sunny with a few large white, fluffy clouds.

On the grid, there appears to be an issue with the left-rear corner of Sainz' car.

"Get me the clutch thing," asks Grosjean, "I really struggled with the start."

Hamilton makes his way to the grid on his scooter, while Vettel runs.

Other than the top ten, - excluding the Mercedes pair - Perez, Giovinazzi and Magnussen start on softs, while Stroll, Raikkonen, Gasly, Russell and Kubica, like Hamilton and Bottas, start on mediums. Kvyat and Albon are on hards.

The field heads off on the parade lap.

Leclerc and Vettel both very aggressive in terms of generating heat into their tyres.

They're away. Strong starts from both Ferraris, and as they head towards Turn 1, Vettel is alongside Hamilton, the German getting ahead. Through the kink that is Turn 1, Vettel slingshots Leclerc and they head into Turn 2. Vettel has the inside line and is ahead of his teammate, while Hamilton is under attack from Sainz and Bottas from Norris.

Further back, the Haas pair run wide as does Ricciardo.

Leclerc is all over the rear of his teammate, but Vettel holds position. In clear air, the German soon builds an early comfort cushion.

The safety car is deployed halfway through the opening lap. Ricciardo has a left-rear puncture while Grosjean is in the barriers after colliding with the Australian in Turn 4. Climbing from his damaged car, the Frenchman shakes his head in disbelief.

Replay shows the Haas driver being hit by the Renault in Turn 2, send Grosjean spinning off into the barrier.

Replay shows that initially Stroll clouts Giovinazzi, while up ahead Hulkenberg is caught between Perez and Verstappen. Ricciardo bangs rear wheels with Stroll and subsequently is in a three-into-one situation with Giovinazzi and Grosjean. You can guess the rest.

Kubica pits and switches to the hards, while Ricciardo slowly makes his way back to the pits. The Australian eventually gets back to the pits, where he is joined by Giovinazzi who gets a new front wing.

At the end of lap 2, Kubica pits again, now switching to the mediums.

The safety car is withdrawn at the end of lap 3, Vettel maintains his lead, as he did in Singapore. Magnussen passes Hulkenberg for 9th.

In 5th, Bottas is sandwiched by the McLaren pair.