Hamilton aiming to be carbon neutral 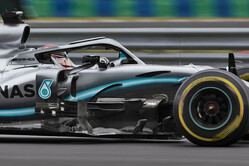 In the wake of the Japanese Grand Prix, Lewis Hamilton took to social media revealing despair at the lack of environmental awareness at a time Extinction Rebellion was dominating the headlines with its protests.

In some quarters the Briton was openly mocked, with critics asking how it was possible that a man who makes his living from driving racing cars all over the world could claim to be environmentally aware.

Indeed, critics pointed to his collection of supercars, his private jet and his seemingly never ending travels around the globe for interests other than F1.

Speaking at today's FIA press conference Hamilton defended his social media comments while insisting that he is already making serious efforts to reduce his carbon footprint and indeed aims to be carbon neutral by the end of the year.

"I was watching a documentary and it was just sad to see the things that we are kind of not aware of," he told reporters. "It inspired me to want to do more and reach out to those who perhaps don't know some of the things that are happening.

"I'm trying to make sure that by the end of the year I'm carbon neutral, " he continued. "I don't allow anyone in my office but also within my household to buy any plastics. I want everything recyclable down to deodorant, down to toothbrush, all these kinds of things.

"I'm trying to make as much change as I can in my personal space," he added. "I sold my plane over a year ago. I fly a lot less now, I try to fly less through the year and mostly fly commercial so that's been a big change in my habits. I've avoided trips as well if I don't need to do it, been in the UK for example with family and gone up to Bedfordshire and stayed with the family instead of gone on holiday.

"Obviously, I've changed my diet which is quite a drastic difference," he said.

The Briton revealed that he is also seeking to change attitudes at Mercedes and clothing partner Tommy Hilfiger.

"I work with the team who are also really pushing to be carbon neutral," he said. "For instance in the canteen, because there's a lot of plastics, you'll see here we have mostly just water which are bio-degradable bottles.

"Obviously I work with Tommy Hilfiger. Nearly 70% of all the clothes that I've done are sustainable: Either recycled fabrics or faux-leather, faux-suede and the goal is to have that 100%.

"At some point that will be 100% sustainable, hopefully in the next year or two. That's also encouraged Tommy Hilfiger who work in quite a damaging industry to also look into that and push that direction."

"If you look at our sport it's shifted from using a third less fuel now.

"There's more I think that Formula 1 can do," he added. "They are putting plans together but I think we have to push all the industries, we have to push Formula 1 to do more and I think they're giving us a proposal later on today for the plans they have in place and we'll do whatever we can to support that."

However, asked if he might consider a move to Formula E at some future point, the Briton was in no doubt, admitting that he had "no interest in Formula E whatsoever."